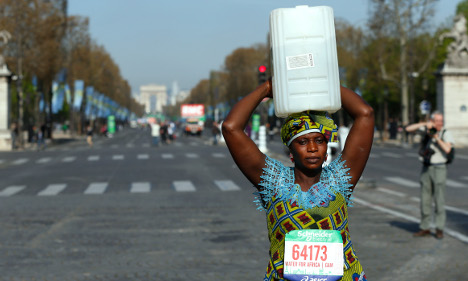 Gambian woman Siabatou Sanneh carries a jerrycan of water on her head to raise awareness for the "Water for Africa" charity. Photo: AFP
Korir, 30, who was second in last month's Paris Half-Marathon, came home in an official time of 2hr 05min 49sec, ahead of another Kenyan, Luka Kanda (2:07:20).
Seboka Tola of Ethiopia was third, in 2:07.33, with yet another Kenyan, Mike Kigen, fourth.
Meseret Mengistu of Ethiopia, a surprise late entry after an invitation from the organisers, won the women's event in 2:23:26. (Mark Korir crosses the finish line. Photo: AFP)
Mengistu, 25, shattered her own personal best, the 2:29:22 she ran in 2013.
Her compatriot Amane Gobena (2:23:30) was second and Kenya's  Visiline Jepkesho third in 2:24:44.
The race saw over 40,000 people cross the finishing line, some of whom took the chance to have their voice heard – including Gambian woman Siabatou Sanneh, pictured below.

Siabatou ran the #ParisMarathon as reminder of long distances walked to get to clean #water in many parts of Africa pic.twitter.com/hwLhjPN1ge

She carried a jerrycan of water on her head while walking the route to raise awareness for the cause of charity "Water for Africa" – pointing out that many people living in Africa must walk great distances each day to obtain drinking water. Runners in the picture above applaud the Gambian woman as they run. As for the runners, Kigen led the decisive breakaway 10km from home but he was reeled in by Korir, who set off in pursuit and caught him up 5km out in the Bois de Boulogne before streaking away to leave Kigen trailing in behind the first three.
"When I saw the others accelerate between 25km and 30km, I just kept the same rhythm without looking to follow them," Korir said
He explained: "The first half of the race was run at a slowish pace, so that meant I could accelerate whenever I wanted to."
Korir is only the fifth man to run under 2hr 06min in the French capital.