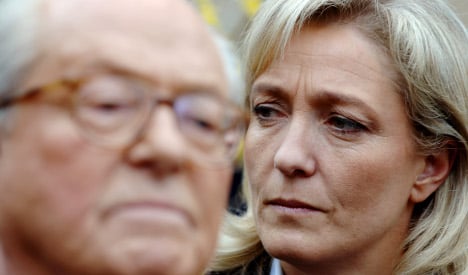 Jean-Marie Le Pen has succumbed to pressure from his daughter and will not stand in the regional elections. Photo: AFP

Jean-Marie Le Pen, the founder of France's National Front, said he was pulling out of regional elections Monday after a
row with his daughter who now leads the far-right party.

Le Pen incurred the wrath of his daughter Marine Le Pen by repeating an assertion that the Nazi gas chambers were a "detail of history" and following that up with a defence of France's wartime leader Petain, who collaborated with the Nazis.

He told the Figaro magazine he would not be standing in the southeast of France for the party even though "I think I was the best candidate for the National Front".

In stepping down, the 86-year-old appeared to get in another dig at his daughter, who has been trying to clean up the party's racist and anti-Semitic image in a bid to make it more electable.

Asked by the Figaro who should stand in his place, he anointed his granddaughter Marion Marechal-Le Pen, 25, a rising star in the party with social views considered more conservative than Marine's.

"If she accepts, I think she would head a very good list (of candidates). She is certainly the best, I am not going to say after me, but she is," he told the magazine.

The dramatic family feud first burst into the open last Wednesday with Marine accusing her controversy-loving father of committing "political suicide" when he said Nazi gas chambers were a "detail of history" and defended war-time French leader Philippe Petain, who collaborated with Hitler's regime.

Then on Thursday, Marine Le Pen said the 86-year-old former FN leader had been summoned "to the executive body" for disciplinary proceedings.

Marine Le Pen also asked her father "to prove his wisdom, draw the consequences of the trouble he himself has created and maybe give up his political responsibilities."

Marine Le Pen said on TF1 television that the row pained her deeply — both as a daughter and a member of the FN, which has made huge electoral strides in recent years, becoming one of Europe's most successful far right parties.

"But before being daughter and father… we are political leaders and in being so we have huge responsibilities with regard to not only the future of the National Front but also to the future of our country," she said.

Jean-Marie Le Pen didn't take long to hit back, taking to the airwaves of French radio station RTL to lambast his own daughter, saying he was "flabbergasted" by her decision.

"I don't understand the reason for this action. Marine Le Pen is in the process of blowing up her own party," said the veteran of the France-Algeria War, who has numerous convictions for hate speech.

"It's not me killing myself, it's she who is shooting herself in the foot," the 86-year-old told RTL radio.

However with Monday's announcement that he will not stand in December's regional elections in the Provence-Alpes-Côte d'Azur, it appears that Marine Le Pen is winning her battle to ease him out of politics.

And both appear to have realised that the public spat is tarnishing the image of the party.

In a later statement on Monday Jean-Marie Le Pen said he would "not be party" to a "serious crisis" that has hit the FN because of his recent comments.

The interviews "do not justify the racket that has been set off in our ranks which could weaken our movement to a dangerous degree," he said.

In a poll published on Sunday, more than two-thirds (67 percent) of FN voters said they were in favour of Jean-Marie's departure while 74 percent said they believed his media sorties were harming the party.