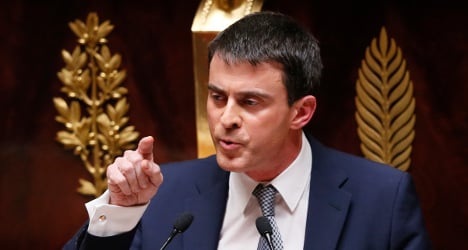 As he presented the bill to parliament on Monday, Valls insisted that the new powers were not a snap response to the Paris terror attacks in January.

He moved to reassure critics, who fear it will lead to mass data gathering of the kind carried out by the NSA and revealed by whistleblower Edward Snowden.

“The means of surveillance to anticipate, detect and prevent threats will be strictly limited,” he said.

"Intelligence services are absolutely not allowed to monitor the lawful actions of a just cause. In any democracy, intelligence is in place strictly to protect citizens and their freedom."

He took the chance to mention that of the hundreds of French people who had made their way to Islamic State-held territory, seven had died staging the suicide operations.

"Is Daesh (Isis) deliberately sacrificing these types of people as a matter of priority? Do the candidates for suicide attacks have to prove their ideological zeal to vouch for their conversion?" Valls said.

"In any case, this illustrates Daesh's formidable ability to indoctrinate."

The draft laws have sparked a firestorm of protest from rights groups which charge they infringe on individuals' privacy.

But the government insists they are vital for effective policing with France facing, in the words of Valls, its greatest ever terrorist threat.

Valls himself presented the legislation in the National Assembly lower house of parliament – a sign of the importance the government attaches to the bill.

He even told the gathered lawmakers that it was "unusual" for a prime minister to be present as a bill is presented, reported Le Parisien newspaper.

The text enjoys support from both main parties and is therefore certain to be adopted when deputies vote on May 5.

The new law allows authorities to spy on the digital and mobile communications of anyone linked to a "terrorist" enquiry without prior authorisation from a judge, and forces Internet Service Providers (ISPs) and phone companies to give up data upon request.

Intelligence services will have the right to place cameras and recording devices in private dwellings and install "keylogger" devices that record every key stroke on a targeted computer.

The authorities will be able to keep recordings for a month, and metadata for five years.

As MPs debated inside parliament, a small number of protesters gathered outside to show their opposition to the proposed extension of powers.

Several organisations grouped under the banner of The Observatory of Digital Freedoms, which includes Amnesty International and the League of Human Rights had called on people to protest.

They denounced the text that is “wrongly being presented as an anti-terrorism bill that gives intelligence services massive surveillance powers without any controls.”

Among those protesting was former minister of housing Cecile Duflot, who said: “This is a bill that touches the very meaning of the constitution.”

According to the Observatory, the proposed reforms will “endorse illegal practices by intelligence services” and legalise methods of “intrusive surveillance”  comparable to those of the NSA that were revealed by Edward Snowden.

La Quadrature du Net, one the civil liberties groups that have joined the Observatory of Digital Freedoms also blasted the bill.

"The proposed law provides for the general legalisation of currently illegal Intelligence practices with no control or debate about their finality and effectiveness.

"It will lead to mass surveillance of citizens' data and communications over the Internet, all without adequate checks and balances prior to interceptions nor actual means for citizens to challenge potential abuses. "

The MP who drafted the law, Jean-Jacques Urvoas, noted that France is the "only Western democracy" without a precisely defined legal framework for its surveillance operations.

This means French spooks are operating in a legal "grey zone," opening them up to legal challenges, said Urvoas.

A poll published on Sunday showed that nearly two-thirds of French people were in favour of restricting freedoms in the name of fighting terrorism.

Only 32 percent of those surveyed in the CSA poll for Atlantico said they were opposed to freedoms being reduced, although this proportion rose significantly among young people.

However, the national digital council, an independent advisory body, has come out against the proposed legislation

The group said it was akin to "mass surveillance" which has "been shown to be extremely inefficient in the United States."

It also said it was "unsuited to the challenges of countering terrorist recruitment" and "does not provide sufficient guarantees in terms of freedoms."

Interior Minister Bernard Cazeneuve hit back, however, saying over the weekend: "Speaking of generalised surveillance is a lie."