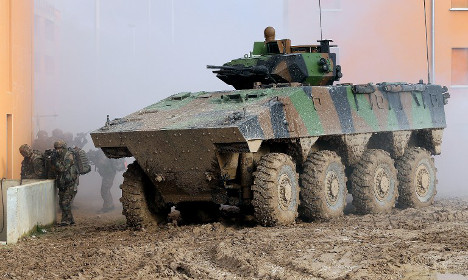 A French armoured vehicle in Sissonne, northern France. Photo: AFP
No country in western Europe spent more on their military forces in 2014 than France, said the Stockholm International Peace Research Institute (Sipri).
Indeed, France's $63.2 billion receipt was enough to make it the fifth biggest spender in the world behind the US, China, Russia, and Saudi Arabia. The UK was the next biggest spender at $60.5 billion.
This reflects everything from the sheer size of France's economy to the country's past, explained Sam Perlo-Freeman, head of Sipri’s Military Expenditure project.
"What countries spend has a lot to do with the overall size of their economy, like with the US and China. However, of course it's also how much of a priority the military is in the country, what the security threats are and historical factors," Perlo-Freeman told The Local.
The thinktank found that many eastern European countries had increased their military spending – with Russia topping their spending by 60 percent – but that France and the UK had done the opposite. (Graph courtesy of Sipri)
"France and the UK are two of the biggest economies in Europe and are also former imperial and nuclear powers. They've had this sort of global role for a long time and have seen themselves as powers beyond their immediate area. They see that they have more of a share of things than most other countries who do not have that historical position," Perlo-Freeman said.
"Their spending has fallen since the economic crisis. The extent to which they have had this global role has diminished vastly, but they are still relatively high spenders," he added.
France’s core defence budget – excluding pensions and the gendarmerie – is constant in nominal terms in 2015 at €31.4 billion ($33.8 billion), Sipri noted. This is in line with the 2013 ‘Loi de Programmation Militaire’ (Military Planning Law), indicating a small real-terms fall.
Sipri noted that on the whole, the world spent $1.8 trillion on military in 2014, with the biggest changes coming from Eastern Europe as they react to the ongoing Ukraine crisis.
Ukraine itself boosted its defence spending by 23 percent, with Russia increasing its spending by 8.1 percent and Poland doing the same by 15 percent. The US, meanwhile, remains the biggest spender in the world when it comes to the military, with its $610 billion receipt in 2014 accounting for 34 percent of world military expenditure.
By Emma Anderson/Oliver Gee

MILITARY
France vows to stay in Syria even after US leaves
Url copied to clipboard!