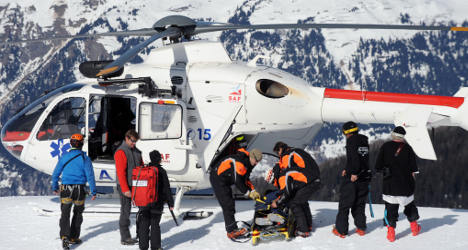 The family were making their last descent of the mountain late Friday when the mother stopped to stop to help the boy's sister who had fallen, Michel Ollagnon, police commander for the southeastern town of Bonneville, told AFP.

The British press on Sunday named the boy as Carwyn Scott-Howell from Wales who had been on holiday with his family in the resort of Flaine in France's Haute Savoie region.

He had wandered off from the side of his mother, sister and brother, who quickly lost sight of him.

He "took off his skis and continued on foot. He must have panicked and did not see the cliff" where the boy's skis were found, added Ollagnon.

The mother later raised the alarm but rescuers only found the child's skis. A helicopter subsequently spotted his body at the bottom of the cliff.

"He died instantly. He had probably been dead for two hours before we found him," the local fire department said.

"It's a dreadful accident that could happen to many people," said Agnes Robine, the deputy prosecutor of Bonneville, southeastern France.

Local authorities have opened an investigation into the accident.