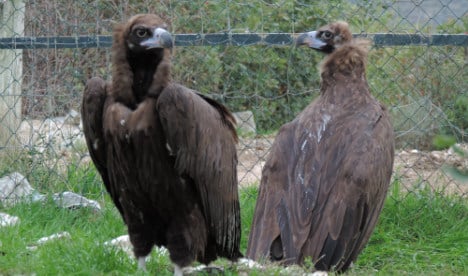 Black vultures at the rehabilitation centre before being transferred to France. Photo: Vulture Conservation Foundation

Spain is helping to reintroduce France’s population of black vultures, almost a century after they were poisoned to extinction.

Seven black vultures (Aegypius monachus) are being transported this weekend from Spain to new homes in France where they will be released into the wild after being fitted with a satellite tracker system.

The birds have been sent from the regions of Extremadura and Andalusia which currently boast the biggest population of the scavenging birds in Europe.

"Spain currently holds 90 percent of Vultures in all of Europe so our population is healthy enough to send some to France to help theirs," explained Dr Jóse Tavares, the director of the Vulture Conservation Foundation, which oversees the project.

The birds that are to be sent from France are those which have been rescued from the wild and nursed back to health in rehabilitation centres. Photo of a black vulture at the rehabilitation center before transfer, courtesy of Vulture Conservation Foundation

"They are about a year old and are birds that became too weak to fly. A vulture can survive for about two weeks without eating but these young birds, because of their inexperience went out to look for food, couldn’t find it and then became too weak to get off the ground again," Tavares said in an interview with The Local.

"So we take them into a rehabilitation centre, build up their strength and then instead of releasing them in Spain we send them to France," he said.

Vulture species suffered during the 20th century when huge numbers were killed off by poison left out to kill other predators such as bears, wolves and foxes.

"The vultures either ate the bait or they ate the carcasses of those that did and the species started to disappear," Tavares explained. Tavares accepts that they are not the easiest animal to get the public excited about.

"Vultures have a bad image but actually they are extremely useful. They don’t kill anything and in fact are the cleaners of the countryside," he emphasized.

The head of the conservation charity explained what huge success Spain has had in bringing the species back from the brink of extinction.

"In the 1980s there were less than 250 breeding pairs and now we have more than 2,000 in parts of Spain, the most prolific in Madrid, Extremadura and Andalusia," he said.

So a project was born to share the vultures with Spain's northern neighbour and there are now 40 breeding pairs in southern France.

"We are confident that within a couple of years the black vulture population of France will be self-sustainable and then we can extend the project elsewhere – to the Balkans," said Tavares.