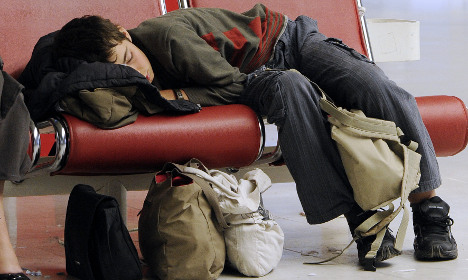 Flights have been sent out across Europe to rescue children and other passengers left stranded abroad by the French air strike. Archive photo: AFP

The low-cost airline easyJet is on Friday sending rescue flights to repatriate schoolchildren and hundreds of holidaymakers stranded across Europe by the French air traffic control strike.

The carrier is laying on five special flights to and from Luton, Gatwick, Paris, Barcelona, and Marrakech and will seek to use larger planes to ease the problems caused by the 48-hour controllers' strike which ended on Thursday.

Easyjet was among the worst-hit of the airlines affected and had to cancel 331 flights on Thursday and 248 the previous day.

"We are operating five rescue flights, prioritising the repatriation of three groups of schoolchildren," a spokesman said.

"We recognise that there are a number of passengers across the network who have been affected by these cancellations and still require flights as soon as possible.”

Other carriers, including Ryanair, British Airways and Flybe were also badly affected by the strike, with Ryanair having to cancel more than 250 flights on Wednesday.

The French air traffic controllers are scheduled to stage two more stoppages in the coming days – the first from April 16-18 and the second from April 29 to May 2.

French aviation authorities had tried to minimise the chaos at airports this week by asking airlines in advance to cancel 50 percent of their scheduled flights.

That meant many holidaymakers were left stranded abroad, unable to make it home after the Easter holidays.

The strike, called by the SNCTA union, which represents most of the country’s air traffic controllers, was in protest against working conditions for the right to negotiate specific agreements that suit their profession, notably to retire aged 57 rather than 59.

A meeting is scheduled for April 13th which the government hope will enable further industrial action to be avoided.