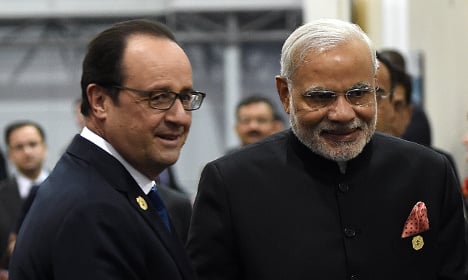 Modi is seeking to accelerate a drive to turn India into a manufacturing and investment hub, and attention will be on whether Paris and New Delhi seal lucrative, long-delayed fighter jet and nuclear deals.

Paris has for years been locked in tortuous negotiations with New Delhi to sell 126 of its Rafale fighter jets, in a deal estimated at more than $12 billion.

Indian media said ahead of talks between Modi and French President Francois Hollande on Friday that the government was considering a direct purchase of a smaller number of jets to accelerate the purchase and replace its ageing air force fleet.

The Hindustan Times said the government was "seriously considering strategic purchase of up to 40 Rafales for the Indian Air Force" due to "operational necessity", with further purchases later.

It quoted an unnamed source as saying a new deal could be worked out this year, with the exact number of planes depending on the final price.

Hollande said earlier this week that he and Modi "will have discussions" about the Rafale deal, but a diplomatic source added no announcement was expected during the visit.

Modi, a right-wing Hindu nationalist, was effectively blacklisted by the European Union for years, accused of encouraging deadly communal riots in 2002 in the western state of Gujarat, which he governed for over a decade.

But after his landslide victory in a general election last year, and with India's economy now growing faster than even China's, the one-time outcast is likely to receive a warm reception.

'Jobs for the young'

"It's not a coincidence that France is the first country that I am visiting as part of my first official trip to Europe," Modi told French daily Le Figaro before his arrival, pointing to cooperation in a number of sectors such as space, nuclear energy and defence.

"Just like in the nuclear sector, defence cooperation is a key part of our traditional ties with France," he added.

A French diplomatic source said agreements would be signed in the "renewable energy, sustainable cities, transport and cultural sectors".

After a two-day whistlestop tour that will take him from northern to southern France — with a short breather to take in the Paris sights on a river boat —  Modi will jet off to Germany.

He will end his trip further afield in Canada, home to a large Indian diaspora.

Modi is seeking to attract investors as he tries to rewrite India's reputation as a tricky place to do business — beset by bureaucracy, corruption and a stringent tax regime.

The government has already relaxed rules for foreign investors, eager to create work for the millions who enter India's job market each year.

"Our main challenge is to create jobs for the young — 800 million Indians are less than 35 years old," he told Le Figaro.

While Modi was quick to meet US President Barack Obama and Asia's top leaders after his election last May, it has taken him nearly a year to travel to Europe. 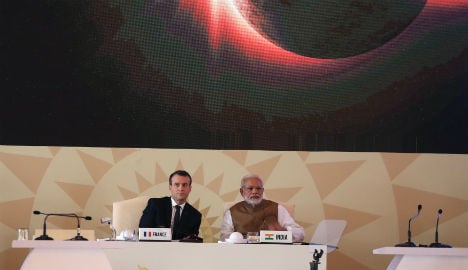 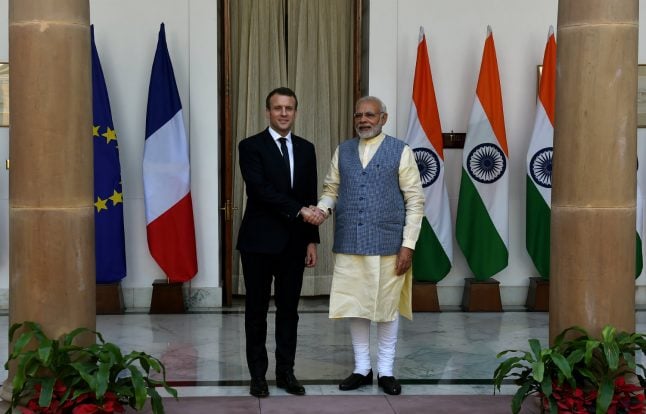