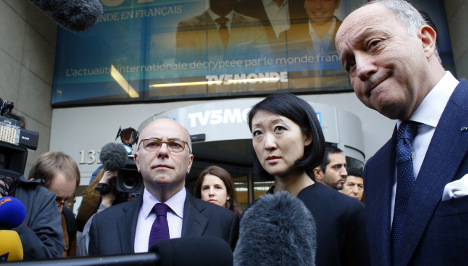 French ministers speak outside the offices of TV5Monde after it was targeted in a cyber attackers this week. Photo: AFP

The militants shut down transmissions at TV5Monde from late Wednesday to Thursday and hijacked its website and social networks, posting documents on its Facebook page purporting to be the ID cards and CVs of relatives of French soldiers involved in anti-IS operations.

But the ministry denied this on Friday after "thorough examination" of the "supposedly confidential" documents.

"None of these documents mention the identity of French soldiers or of their families," it said in a statement.

The cyberjihadists were able to black out the 11 channels of TV5Monde for several hours, and the station was then forced to broadcast pre-recorded programmes for most of Thursday until it resumed full operations around 6 pm local time.

Authorities said the hack was likely a "terrorist act" and urged media companies to be "vigilant", warning that further attacks could not be ruled out.

The hackers had accused French President Francois Hollande of committing "an unforgivable mistake" by getting involved in "a war that serves no purpose".

"That's why the French received the gifts of Charlie Hebdo and Hyper Cacher in January," they said on the broadcaster's Facebook page, referring to the January attacks in Paris by Islamist gunmen that left 17 people dead including at the satirical magazine and a Jewish supermarket.

France is part of a US-led military coalition carrying out air strikes against IS in Iraq and Syria, where the jihadist group has seized swathes of territory and declared an Islamic "caliphate".