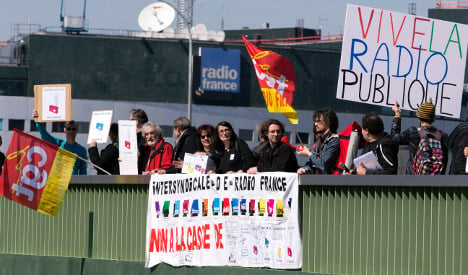 Striking employees demonstrate on a bridge near the Radio France headquarters, the Maison de la Radio. Photo: Kenzo Tribouillard/AFP
"I still have four years of my mandate and during those four years I will not let up," said chief executive Mathieu Gallet, an ambitious 38-year-old with the looks and smooth delivery of a TV host, who was appointed to the top post at Radio France a year ago.
His uncompromising performance to lawmakers on a parliamentary cultural commission Wednesday set the scene for further digging-in by both sides in what is already Radio France's worst-ever labour dispute.
The strike started March 19 and has gone on for an unprecedented three weeks with no end in sight.
Listeners used to tuning in to one of Radio France's six stations can now only hear music interspersed with occasional and very brief news breaks by non-striking journalists.
A visibly exasperated Culture Minister Fleur Pellerin told parliament: "This conflict has gone on for too long."
She promised "very rapidly" she would make known decisions to restore dialogue between Radio France's management and unions, but  did not elaborate.
"The situation remains frozen," Pellerin said. "I will shoulder my responsibilities."
Poisonous relations
The relationship between Gallet and the unions, which mostly cover the radio group's technicians, has become poisonous.
Gallet did himself no favours by embarking on what the satirical weekly Le Canard Enchaine said was a 100,000-euro ($110,000) renovation of his office and by hiring of a PR consultant on a 90,000-euro salary as he prepared his job-cutting plan.
Now some union representatives will have nothing more to do with him.
"We have arrived at the point of no return," the head of the CGT union, Philippe Martinez, told French television network Canal+, where Gallet worked from 2001 to 2006.
Gallet left Canal+ to become an adviser to the right-wing government of former president Nicolas Sarkozy.
In 2010, he was named as head of France's National Audiovisual Institute which manages the country's TV and radio archives. Four years later, the
left-wing Socialist government appointed him boss of Radio France.
€21-million budget shortfall
On Wednesday, Gallet was to present the details of his plan to the broadcaster's employees.
It calls for 300 jobs to be sliced from the group's 4,600-strong workforce, for webradio to take over from some of the more esoteric broadcasts, the halt of long- and shortwave transmissions, and the reduction in size of the group's two classical orchestras.
The aim is to fill a 21-million-euro shortfall in Radio France's budget. The group receives 664 million euros per year, 90 percent of it from a tax imposed on French households with a television.
"I am going to continue with this project," Gallet declared to the lawmakers Wednesday. He added that he believed that "the large majority" of
Radio France employees backed his plan.
In a possible sign the Socialist government could step in to calm the conflict, one lawmaker said Radio France might receive an extra 80 million
euros in public money, but there was no immediate confirmation from the culture ministry.