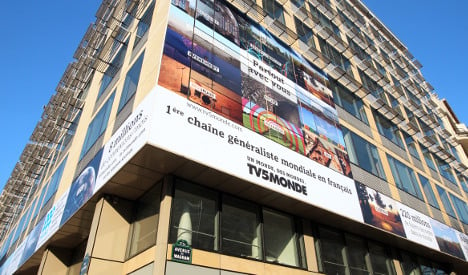 Since January's three-day Islamist attacks in Paris that killed 17 people, hackers have launched hundreds of assaults on French websites, from denial of service attacks that snarl up web traffic to full-scale hacks.

But taking over a television channel and blocking programming — as happened to TV5Monde — is another matter entirely, experts believe, an "unprecedented" attack, according to the station's boss Yves Bigot.

"This is certainly a step up," said Gilbert Ramsay, expert on cyberjihadism at Scotland's St. Andrews University.

"For years now, low-level cyber-attacks have been a routine part of Islamist mobilization. They have published manuals on how to hack websites.

But this is an escalation," he added.

What's more, they are almost impossible to trace, as they work in virtual teams and can be based anywhere in the world.

"Sometimes they don't even bother to hide their IP addresses," said one cyber-crime investigator, who did not wish to be identified.

"Cyberjihadist attacks are commonplace, but this is the first time they have been able to stop a television channel," this source said.

Like real-world "terrorism", these virtual warriors "come from all sorts of backgrounds," he added.

However, he said "investigations generally led towards the countries of North Africa."

Even during a wave of Algerian attacks on France in the 1990s there were "high-level IT experts capable of launching sophisticated attacks," he said.

"So we shouldn't be surprised, given the means at the disposal of the Islamic State, that they can afford the best specialists."

"Some people think that jihadists are low-brow terrorists, but that is not at all the case: they have considerable technical know-how," added Martin.

He said the attack on TV5Monde was probably months in the planning and would have required several hackers working in close coordination.

As of late afternoon on Thursday, the station was still able only to broadcast pre-recorded programmes but had regained control of its website.

Just hours before the attack, the Islamic State extremist group had published a video praising their "knights of the media" carrying out cyber-attacks and urged them to step up their efforts.

"They have global recruitment," said Martin.

"A bit like the Chinese army, which has set up cyberwarfare battalions, they are totally capable of doing the same thing."

Ramsay from St. Andrews University said he believed the jihadists had something to prove after recent military reverses — notably in the Iraqi city of Tikrit.

"The IS fundamental theme is momentum: They want to show that they are on the offensive, on the ground and in cyberspace," he said.

"After the set-back in Tikrit, for example, it can be important for them to show that they can continue the struggle elsewhere."