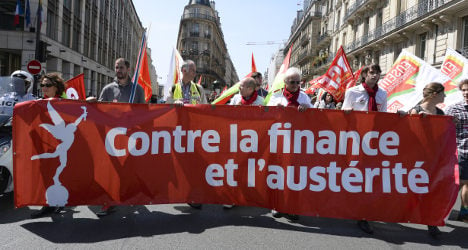 Various trade unions had called on workers to join the protest against austerity and in the name of "protecting social services, public transport, and employment".

Thousands of protesters marched in Paris between the Place d'Italie and the Invalides on Thursday afternoon and thousands more rallied in cities across France.

"For months we have tried to explain to the government that it must change its economic policy because the effect of austerity is impacting on employment, public investments and wages,” Philippe Martinez, the general secretary of the CGT union, told the television channel France 2.

Martinez led the demonstration in Paris with the FO union leader Jean-Claude Mailly who said: “The slogan we’ve chosen is ‘Enough is enough!’ (‘Maintenant ça suffit!’). Social welfare is crucial but for the moment we are not heard by the government”.

The protesters denounced the freeze of salaries and pensions, the loss of their purchasing power as well as the “loi Macron”, the bill named after the economy minister Emmanuel Macron, which aims to deregulate the French economy and labour market.

The proposed “loi Macron” tackles some of France’s taboo economic topics, such as Sunday opening hours for shops. The aim of the law is to boost the country’s growth and activity by encouraging more competition between businesses.

The bill has been adopted by the National Assembly and is now being debated at the Senate.

Although the strike called by the CGT, FO, FSU and Solidaires trade unions saw little disruption to transport services, some schools had to close as teachers joined the movement.

One victim of the strike was the old Iron Lady In Paris, which was forced to close.

"The Eiffel Tower will be closed until 6 pm (1600 GMT) and will re-open this evening. Ninety percent of the staff… voted to go on strike to denounce government's austerity policies," said union representative Stephane Dieu.

Signs have been placed at the bottom of the tower, one of the world's most visited tourist attractions, so that "tourists don't hang around for nothing," Dieu added.

The "Iron Lady" attracts around seven million visitors a year, of which nearly nine in 10 are foreign tourists.

A separate strike at Radio France has stretched into its fourth week, prompting Prime Minister Manuel Valls to criticise an "intolerable, unbearable situation."

In addition, air traffic controllers are on a two-day strike over their working conditions, forcing airlines to cancel around half their scheduled flights on Thursday.