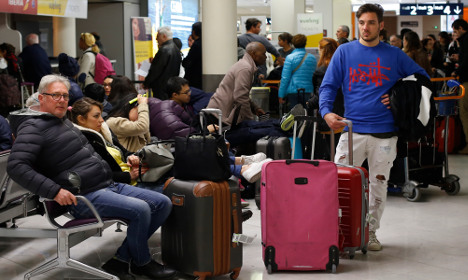 Passengers gather at Orly airport, outside Paris, as hundreds of flights to and from France were cancelled.Photo: AFP

Passengers in France faced travel misery on Thursday as hundreds of flights were cancelled and scores of others subject to severe delays due to an ongoing air traffic control strike.

French aviation authorities had tried to minimise the chaos at airports by asking airlines in advance to cancel 50 percent of their scheduled flights.

That meant many holidaymakers were left stranded abroad and many others were stuck in France unable to make it home after the Easter holidays.

Many passengers took to twitter to vent their anger over botched holiday plans or delays in getting home.

Flight back to #France cancelled thanks to a strike. Now to try & hitchhike back!! #HazardsOfLivingInFrance pic.twitter.com/lN8BVmjuGE

Meant to be flying to France to celebrate our son's engagement -bloody French air traffic controllers strike means our flight is cancelled!

Been sat on a freezing cold plane, waiting to take off for two hours now #whyfrancewhy #france #strike

flight cancelled so have to stay another night in #Paris so took this in #airtraffic #strike #France pic.twitter.com/VQ2wQGRYsg

Family stuck in Bergerac France due to air traffic control strike – told by airline earliest flight home is next Wednesday!

Other two day walk-outs are however planned for the coming weeks.

Flights in and out of Paris’s two main airports Roissy Charles de Gaulle and Orly were particularly hit as too were other airports around the country.

In Nice 44 percent of the 157 flights due to depart were cancelled and in Montpelier it was worse with airport managers saying that all flights were cancelled on Thursday.

In Toulouse 119 out of a total of 238 flights in and out of the Toulouse-Blagnac airport had to be scrapped.

Air France warned that last-minute cancellations could also not be excluded as the day goes on and long delays should be expected.

The strike, called by the SNCTA union, which represents most of the country’s air traffic controllers, is set to be exacerbated on Thursday thanks to a strike by several other unions, including the more radical CGT and the FO, as they protest against austerity.

The SNCTA are protesting against working conditions and want the right to negotiate specific agreements that suit their profession, notably to retire aged 57 rather than 59.

A meeting is scheduled for 1pril 13th which the government hope will enable further industrial action to be avoided.