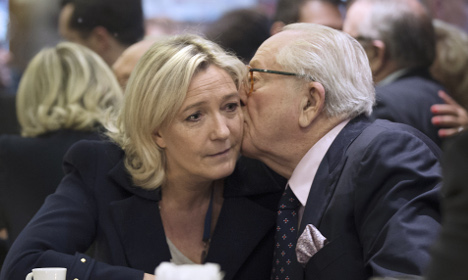 Marine Le Pen does not look too happy to receive a kiss from her father Jean-Marie. Photo: AFP

The leader of France's far-right National Front party, Marine Le Pen, said on Wednesday she would "oppose" her father standing in upcoming regional elections, as the major rift between the pair deepens.

After a series of controversial comments, including over Nazi gas chambers, Jean-Marie Le Pen's strategy appears to sit somewhere "between a scorched earth strategy and political suicide", daughter Marine said in a statement, adding she would oppose him standing in December's regional polls in the Provence-Alpes-Côte d'Azur region of southern France.

Jean-Marie Le Pen, the founder of the FN, last week reiterated his belief that gas chambers were a mere "detail" of World War II — an assertion he has made repeatedly over nearly three decades, earning convictions for hate speech along the way.

And on Tuesday this week Jean-Marie Le Pen, who is also an MEP gave an interview to far-right magazine "Rivarol" in which he blasted the government for being full of immigrants or children of immigrants "at all levels".

He also suggested France must work with Russia to save "northern Europe and  the white world" and he defended Maréchel Pétain, the leader of Vichy France, that collaborated with the Nazis during the war.

Up until now Marine Le Pen has distanced herself from her father, claiming that he only speaks for himself, but these latest comments and interviews appear to have been the straw that broke the camel's back.

She also accused her father, the current honorary president, of taking the National Front "hostage" with his provocative comments.

"His status as honorary president does not authorize him to take the National Front hostage with such gross provocations whose goal seems to be to do harm to me but unfortunately is damaging to the whole movement, its leaders, candidates, followers and electors, “ said Le Pen.

The leader, who has done much to improve the image of the party, said the current crisis in the National Front was “unprecedented”.

Speaking of her "deep sadness," his daughter Marine said she would call a top brass meeting at the party "to discuss with him how to best protect the political interests of the National Front."

Since taking over the FN in 2011, Marine Le Pen has sought to make the party a more palatable alternative for mainstream voters.

The strategy helped lead the FN to first place in last year's European elections in France and a quarter of the votes in the first round of local polls last month.

French political scientist Bruno Cautres from Sciences Po university tells The Local that Marine Le Pen has to ditch her father before the 2017 presidential elections.

"If Jean-Marie Le Pen is still in the party in 2017, giving these kind of provocative interviews, then it will clearly be damaging to her chances of succeeding in the presidential election.

"She has to do something about him, there's no doubt about that now.

Cautres says however it won't be easy for Marine Le Pen to push her father aside.

"He is still held as a symbol for the old militants of the National Front and he is the honorary president, don't forget," said Cautres.

After a gradual deterioration in their relationship there is a now a veritable "rupture" between father and daughter.

"The difference is Jean-Marie Le Pen does not have his sights set on power but Marine Le Pen does. She and deputy leader Florian Philippot represent a new party, unlike her father who is a veteran of the Algeria war.

"They have clear ideological differences and this is a real crisis for the party."

Jean-Marie is "a historic figure who always amuses the crowd and… appeals to the historic, hard-line wing of the FN," she noted.

"But at the same time, they're never going to lose that part of the electorate. What's the risk of cutting off Le Pen? You might lose one or two percent but you might gain five or six."

"Think of the section of the (centre-right) opposition UMP that are disenchanted by traditional political parties… for them, the barrier presented by Le Pen has disappeared."