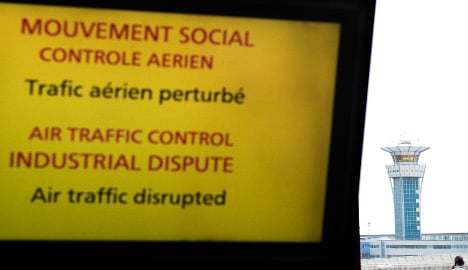 “Typical! The tourist season arrives and France goes on strike again,” was how one commenter on The Local’s Facebook page summed up the frustration that many will be feeling.

But France's air traffic controllers themselves insist they have been left no option to strike as the French government refuses to listen to the concerns which they claim are motivated by defending their profession and keeping the skies safe for passengers.

The SNCTA union, which is the most powerful union among controllers, claims the government and civil aviation chiefs the DGCA are to blame for the fact Wednesday’s strike is going ahead for failing to give them representation in negotiations.

'The union needs to flex its muscles'

“The government is as much to blame as the union,” one French air traffic controller told The Local this week. “It’s a very French way of doing things but the union has to demonstrate its power to cause problems to scare them and show them they need to treat the negotiations with the union more seriously.”

“When the SNCTA offers logical and intelligent reasons for their concerns and they are simply ignored then you have to strike. The strike this week may prevent other planned action from happening in their future,” said the Paris area-based controller who asked not to be named.

The union’s concerns centre around the future of air traffic control in France, worsening conditions of work, the highest retirement age in Europe and a potential impact on safety.

“The density and complexity of air traffic is rising as human and technical resources are in decline,” said the SNCTA.

“Air traffic controllers fear the consequences of an overload in air traffic that may interfere with their ability to handle flights regularly and safely,” the union added.

The union is against plans by the DGAC to change the working time table so there are less controllers on duty during non-peak times, which would mean more split shifts for controllers.

“In case of high traffic, the level of concentration needed is very high and it is essential to have adequate staff to cover for breaks,” the air traffic controller said.

“Fatigue can result in a lack of checking our control instructions. It's not for comfort we need this, but for safety reasons,” he added. 'Why change a winning team?'

“The problem is it can only take five to ten minutes for air traffic control to quickly become overwhelmed and we can’t just tell pilots ‘come back in five minutes, I’m busy,” says the controller. “This is why you need enough colleagues next to you.

The ability of air traffic controllers to do their job is, the SNCTA union says, one of the major concerns and one of the reasons they called the strike.

It points out that France is the only the country where controllers can work until the age of 59, whereas in most countries 56 is the upper age limit.

Another bone of contention that has been the source of other air traffic control strikes is the move by EU chiefs in Brussels to take away Europe’s borders in the skies.

The Single European Sky project aims to bring air traffic control under the one roof. Its proponents say it will cut costs, increase efficiency and “bring the management of Europe’s airspace into the modern era,” all without losing any jobs.

But French air traffic controllers say the reforms are not improving the system in France and leading to too much interference and needless regulations.

“The system of air traffic control in France works. There are never any problems and it is not that expensive for the state,” the controller told The Local. “'Why would you want to change a winning team’ as they say.”

He added that the French controllers were suffering from a kind of “culture shock” with the new standards and regulations being imposed on them from Europe.

READ ALSO: So why are the French always on strike? Those who have been critical of the strikers accuse them of simply trying to protect their own interests and not caring about the bigger picture.

French air traffic controllers fear the service will eventually be privatised as is the case in most other countries, which would lead a worsening employment conditions and a less effective system.

“France is one of the rare countries where air traffic control is still not privatised. We are civil servants and people who work for the DGAC are happy,” he said.

“We earn two to three times less than controllers in other countries, but most value the extra social protection we get. If someone has a health problem or his vision deteriorates and can no longer do the job, then they will be found another job in the civil service,” he said.

“We fear that a more Anglo-Saxon model will be imposed on us, whereby we can earn more money while we are able to, but if things go wrong there is no protection and you are in trouble,” he said.

“It’s a different logic but up until now the French one works well, so why change it?”