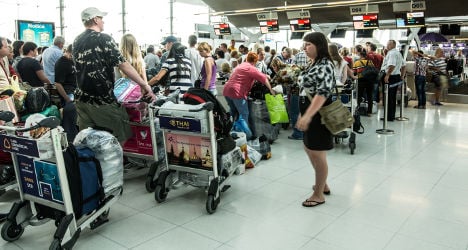 French air-traffic controllers with the SNCTA union are to hold nine full days of strike – starting with a 48-hour stoppage from Wednesday and with the last day on May 2nd.
"Disruption is expected over the whole country," said the DGAC civil aviation authority which has asked airlines to reduce the number of flights by 40 percent on Wednesday.
Air Traffic controllers have had long-running disputes over everything from pensions to workloads. The union is the biggest in the industry, and has 41 percent of France's 4,000 air traffic controllers as members.
The union is calling for talks over working practices and retirement age, currently set at 59 for air traffic controllers.
One French air traffic controller told The Local the plans to cut the number of staff on duty could affect safety.
"In this job it can go from being calm to a controller being inundated within five, ten minutes. And that's when you you need colleagues alongside you," said the controller who asked not to be named.
"You can't just tell pilots that you're busy and come back in 10 minutes."
CLICK HERE to read how French air traffic controllers justify their strike
They will strike from Wednesday to Thursday, then again from Thursday the 16th of April to the 18th, then once again from the 29th of April to the 2nd of May.
The strike will mean some flights in and out of France, particularly short-haul trips, will be cancelled – leaving potentially thousands of tourists stranded.
The timing couldn't be worse for many tourists who are heading home after enjoying the spring sunshine over the Easter break.
Even passengers flying over France will be affected by the strike, with French airspace fielding 8,000 flights a day.
READ ALSO: So why are the French always on strike? Airlines are already advising passengers to check their flight hasn't been cancelled before they leave for the airport.
A spokeswoman for EasyJet told The Local that flights to and from France would be "significantly affected" if the strike goes ahead and that the company would release more information on disruptions on Tuesday afternoon.
Air France was among those the hardest hit of all airlines, but still announced that it planned to run "almost all" its long-haul services arriving in or departing from Paris on Wednesday.
But the airline said it planned to cut around 40 percent of its medium-haul flights.
To make the headache worse for British tourists, Wednesday will also be the first day that British border officials clamp down on cross-channel passport checks.
The government announced earlier this month that it would introduce a new tighter system of passport checks that will see every person’s identity scrutinized.
Ferry operators P&O said at the time the new measure could potentially double the amount of time it took for them to clear a car for boarding.
Travellers were advised to arrive at the ports early and fill in any required documents in advance, to save time at the check in process.