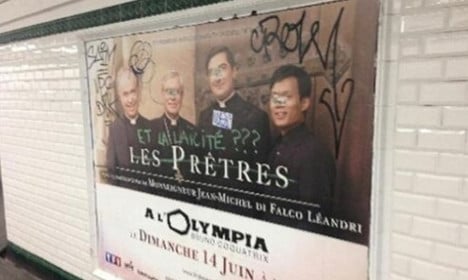 The poster will now be allowed to include the word "Christians". Photo: @Proteus2013/Twitter

After much criticism and a Twitter intervention on the subject by French Prime Minister Manuel Valls, the ban was swiftly dropped.

Pierre Mongin, the head of the state-owned RATP network, told AFP on Monday that it would now display the posters advertising a June concert by French music group "Les Pretres (The Priests)" with the mention that the proceeds would go towards the cause of Christians persecuted in places such as Iraq and Syria.

RATP and its advertising agency Metrobus had previously ordered the group's producers to amend the wording, pointing to the public service's requirement for neutrality "in the context of an armed conflict abroad."

France is a deeply secular country where the state and religion are strictly separated.

The RATP's censorship move created a stir, with some netizens pointing out that while the mention of "Christians" appears to be banned, the subway operator had allowed an ad promoting an extra-marital affairs website.

CHREDO, a French group that aims to raise awareness of the plight of Christians in areas such as the Middle East — where they are currently being persecuted by jihadist groups — has since asked a court to rule on the controversy and a hearing will take place on Wednesday.

CHREDO chief Patrick Karam said on Monday that they will press on with the case saying: "We want a conviction to avoid such behaviour.

"Les Pretres" are a popular group in France, and all but one of its members is an ordained Catholic priest.

The original decision to ban their poster prompted an angry response among Catholics.

On Monday Valls called on RATP, in a tweet, to "assume its responsibilities".

Hours later the underground made a U-turn