Will the famed roadside trees of France's country roads become a thing of the past? Photo: Shutterstock

With the French government under pressure to bring down the number of road deaths fears are growing that a famous feature of the French countryside could be axed.

Around 10,000 “plane trees” or sycamores that adorn hundreds of rural roads for miles up on miles and that are believed to date back to Napoleon could be felled if the government decides road safety must come first.

Interior Minister Bernard Cazeneuve has triggered concern among conservationists when he asked local authorities to undertake a “safety audit” and assess potential hazards from roadside infrastructure.

Although no mention of trees has directly been made, there are fears among conservation groups the famed trees could be chopped down.

“For the moment, this is just an audit but we remain on the alert. We have to wait and see what will result of it,” Chantal Fauché, president of the association for the protection of trees on road sides (Asppar), told the newspaper Le Figaro.

“Admittedly, trees alongside the roads are aggravating factors for accidents but the plan to reduce the number of deaths on the road each year needs to tackle the causes of accidents.

“These are above all alcohol, speed and behaviour. Chopping down trees is a simple political choice, which also enables to generate saving costs from maintenance,” she added. (Chantal Fauché pictured in 2001, during her campaign to protect the plane trees. Photo: AFP)

Nevertheless those calling for the government to take the axe to the trees point to some concerning  statistics.

In 2013, 326 people were killed on the road after hitting a tree, which amounted to 10 percent of people who died in a car accident.

More broadly, the same year, in 36 percent of cases when people died in road accidents, there were fixed obstacles such as a tree, a parked car or a median strip involved.

The debate about the danger of trees on road sides is long-standing one and it’s not the first time conservationists have become concerned.

In 2001, Asppar spoke out against the then claims of the Agricultural minister Jean Glavany who said that “plane trees along side roads are a public danger”.

Those words have been backed by vigilante bikers, who declared war on roadside trees the same year. The group calling itself the Anti-Plane Tree Commando sawed down dozens of trees because they were “sick to the teeth” of seeing motorcyclists or other bikers killed y smashing into one of the trees.

However in 2006, a report concluded that trees on road sides have a positive effect on motorists. It showed trees clearly mark out the road, are useful pointers for security distance between cars and give a sentiment of speed, which makes people slow down.

The first road trees were planted by Henri III, King of France in the 16th century in order to restore the French woods which had been cleared out during the Middle Ages.

Napoléon continued to plant sycamores alongside the roads of his war campaigns as a reserve of wood in the winter and provider of shadow for his troops in the summer. 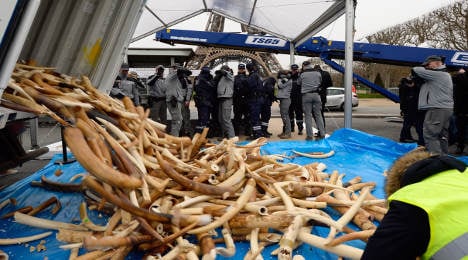 France destroyed three tonnes of elephant tusks on Thursday in a symbolic gesture against the illegal trade in ivory. Photo: Bertrand Guay/AFP

France fired the latest volley on Thursday in the world's uphill battle against African elephant poaching, crushing three tonnes of illegal ivory at the foot of the Eiffel Tower and urging others to follow suit.

The contraband with an estimated street value of  €1 million ($1.4 million) was fed into a machine and ground, with the powder to be carted off and incinerated.

"With this destruction today… France is sending an unequivocal message to poachers, traffickers and consumers of illicit wildlife products," said French Environment Minister Philippe Martin who attended the event.

"We are resolved to continue the fight against trafficking, and to remove any temptation to recover the seized ivory " for the contraband market. Africa's emblematic pachyderms are being massacred at an unsustainable rate for their tusks to produce ivory that is in high demand in the rapidly growing economies of Asia, particularly China and Thailand.

Some 22,000 African elephants were killed illegally in 2012, according to a report last year of the International Union for the Conservation of Nature, which warned of "local extinctions if the present killing rates continue".

The African elephant population is presently estimated at some 500,000 individuals — about half the 1980 total. Environmentalists say destroying confiscated ivory is the only way of ensuring that the contraband is permanently removed from the market.

French environmental group Robin des Bois, whose name means Robin Hood in English, estimates that France has seized some 17 tonnes of the commodity from smugglers since a global ivory ban was imposed in 1989.

The ban has since been partially overturned to allow limited legal sales — a move conservationists claim has boosted black-market demand.

Most of France's stash has been held in storerooms of law enforcement and justice agencies, or museums. The three tons comprised 2.3 tonnes or 698 individual tusks, both unadorned and engraved, as well as 15,357 ivory ornaments including bracelets, necklaces and sculptures.

Martin said his country was the first in Europe since the 1989 ban to destroy seized ivory in such a public gesture, adding he expected other nations will follow suit.