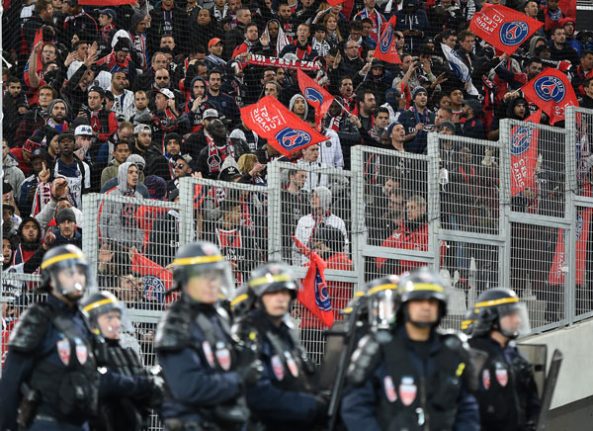 Riot police stand guard in front of PSG supporters at the end of the match on Sunday. Photo: AFP

Eight police officers were injured in the incident, which saw groups of fans clash with police and stewards at the Stade Velodrome ahead of Sunday's late evening game.

The four fans are to be prosecuted for damages and violence to police. Four others have since been released.

A group of Marseille fans also threw stones at the PSG bus on its arrival at the Velodrome, breaking the vehicle's windscreen but injuring nobody on board.

PSG, whose 3-2 victory over Marseille in front of 65,000 spectators saw them go clear at the top of Ligue 1, are to file a complaint, a club source told AFP.

Another fight between fans broke out at the end of 'Le Classique', but the situation was quickly brought under control by stadium stewards.