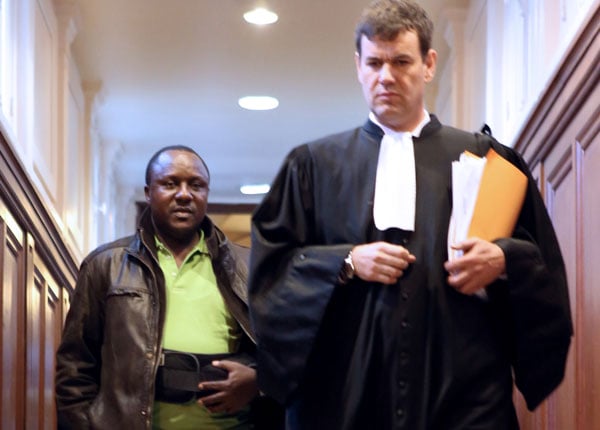 Claude Muhayimana (L) and a lawyer an extradition hearing in 2013. Photo: AFP

Claude Muhayimana, who obtained French nationality in 2010, was arrested a year ago in the northern city of Rouen.

"He will be freed in the middle of next week," his lawyer Philippe Meilhac said.

A judicial source confirmed the decision to AFP.

Rwandan authorities have requested his extradition, accusing him of involvement in the killing of thousands of people in a church and a stadium in the western district of Kibuye. At the time, Muhayimana was working as a driver for a guesthouse.

But France's appeals court refused to extradite him on the grounds that the crime of genocide was not on the statute books in Rwanda in 1994.

On Friday, the appeals court in Paris confirmed the earlier judgement of a magistrate to free Muhayimana.

His lawyer said: "He denies the accusations against him. He has always said that as a member of a mixed family himself, with a Tutsi mother, he tried to save lives."

Alain Gauthier, the president of the CPCR, said he was disappointed by the decision.

"The important thing is that he is put on trial one day," he said.

Around 20 other investigations relating to the massacres are ongoing in France. One genocide suspect, Pascal Simbikangwa, was tried and convicted in Paris in March last year and sentenced to 25 years in jail. He is now appealing.