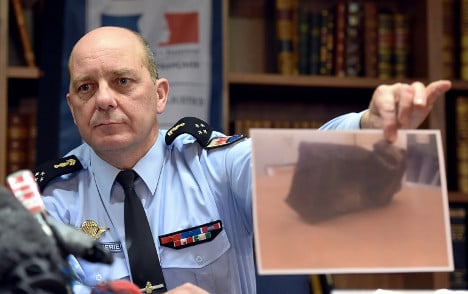 An investigator shows a picture of the second black box from the Germanwings plane that crashed in the French Alps last week. Photo: Boris Horvat/AFP
"A first reading shows that the pilot in the cockpit used the automatic pilot to descend the plane towards an altitude of 100 feet (30 metres)," said the French BEA crash investigation office in a statement.
"Then, several times during the descent, the pilot changed the automatic pilot settings to increase the aircraft's speed."
Alice Coldefy, the only woman on the 43-strong elite mountain police team, uncovered the box on her first day on the search.
"Everyone was happy. It was a relief … a relief for all the people that had been working there for a week and a half without a break," the 32-year-old told AFP. (A picture of the second black box. Photo: Boris Horvat/AFP)
The recorder was found blackened by the fireball and buried deep in the mountain scree and was transported to Paris late on Thursday. Specialist investigators began to analyse the data immediately.

All 150 people on board Flight 4U9525 from Barcelona to Düsseldorf were killed when it crashed into the Alps, in the bloodiest such disaster on French soil in decades. Half of the passengers were German and more than 50 were from Spain.

French prosecutor Brice Robin said 150 DNA strands had been isolated but stressed this did not necessarily mean all the victims had been identified.

Identifying the remains of everyone on board would take "three to five weeks," he said.