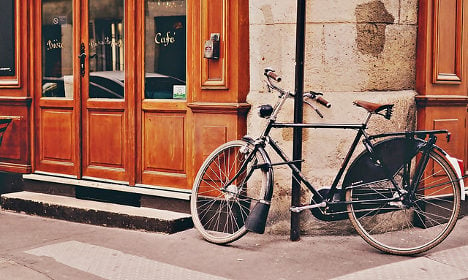 A bicycle by a Parisian cafe. Photo: nthy ramanujam/Flickr
The ambitious plan aims to double the number of cycling lanes in order to provide 1,400 kilometres of safe cycling routes by 2020, up from the current 700 kilometres.
"The aim is to travel and cycle across the city in comfort and security," Kiki Lambert, spokeswoman for the cycling association in Ile-de-France, told The Local.
"Paris's cycling policy cannot be assessed in terms of the number of cycling lanes but in the number of cyclists. More cycling lanes, lower driving speed, and more bike stands all have a positive effect on that. It's a matter of safety by numbers and I believe that has proven to be true in most cities across Europe." (Vélib bikes in Paris. Photo: AFP)
Paris town hall wants to encourage more people to travel across the city using a bike and plans to triple the number of journeys made on a bike from five percent to 15 percent over five years.
The cycling lane “express network” will be organized around the big avenues linking the north and south as well as those linking the east and west of the city. On these main roads, cycling lanes will be separated from the traffic to ensure cyclists' safety.
The proposal also includes increasing the number of two-way cycling lanes on smaller roads where the speed limit for motorists will be limited to 30km/h and even on the Champs Elysées tourists will be able to ride a bike to do their shopping. In the map above, the pink lanes show the proposed north-south and east-west cycling lanes. The thick green lanes indicate existing cycling lanes and the dotted lines indicate proposed lanes, most of which would be two-way.
“This plan will create a new form of tourism in Paris which is booming elsewhere," Christophe Najdovski, the Green Party deputy for transport at the Paris council who proposed the plan, said in a statement.
One of the objectives of the €150-million plan is to develop France’s cycling culture in the city by making it easier to use a bike to get around. Cycling classes and repair workshops are part of the things Paris council wants to encourage. (Photo: Reji/Flickr)
As it stands, Parisians seem keen to mount their saddles. In 2014, the number of people who subscribed to the Vélib’ programme, which allows people to rent a bike from one of the Vélib’ stands in the capital and return it to any other stands in the city, has reached a new record of 283,000 people.
Paris Town Hall is now looking at introducing electric bikes to facilitate people’s journeys on hills and when travelling further away.
This push for encouraging cycling and the use of public transport comes a few days after the pollution cloud which settled across Europe last month, which for a few hours saw Paris ranked as the world's most polluted city.
Paris officials will vote on proposal at the the next council meeting in April.
By Chloe Farand