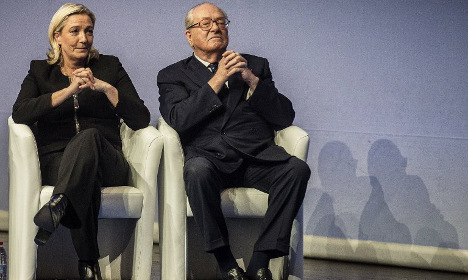 Photo: AFP
Jean-Marie Le Pen landed in hot water once again on Thursday after he told BFM TV that he stuck by his inflammatory views about the holocaust from 1987, when he stated that the gas chambers were "just a detail" of World War Two.
A national Jewish union and anti-racism campaigners condemned the statement, with activist group SOS Racisme pledging to see that Le Pen was "again convicted" for his words.
An investigation was even launched to determine whether he disputed a crime against humanity, a judicial source told newspaper Le Parisien.
Marine Le Pen, his daughter who now leads the anti-Europe and anti-immigration party, was perhaps left the most unimpressed.
"This is nothing new. I profoundly disagree with Jean-Marie Le Pen both in form and content," she told the AFP news agency.
Indeed, this was far from the first time that Jean-Marie Le Pen, one of the founding fathers of the National Front and a Member of the European Parliament (MEP), has left his daughter reeling.
The rift between father and daughter widened last June over an apparently anti-Semitic pun he made in a video.
Jean-Marie Le Pen stirred up controversy in the clip, which was posted on the National Front's website, by vowing to put his critics in their place — including French singer Patrick Bruel, who is Jewish.
In the video, Le Pen railed against a number of critics including pop star Madonna and Yannick Noah, the French singer and former tennis champion.
When asked about Jewish singer Bruel, Le Pen said he would be part of "a batch we will get next time," using the word "fournée" for "batch", evoking the word "four", which means "oven".
Marine Le Pen immediately denounced the statement, the first time she criticized her father in public.
Le Pen senior, who has had multiple convictions for inciting racial hatred and denying crimes against humanity, has also used wordplay in the past to make light of gas chambers used by the Nazis in World War II. In 1988, he referred to a Jewish minister named Michel Durafour as "Durafour-crematoire". In French, the word "four-crematoire" means crematorium.
Le Pen junior has worked hard to distance herself and the National Front from her father. She has repeatedly told French press that Le Pen senior's comments do more to taint his reputation than that of the party.
Since taking over the FN in 2011 she has sought to make the party a more palatable alternative to mainstream voters.
She helped lead the FN to first place in last year's European elections in France and the party won a quarter of the votes in the first round of local polls two weeks ago.
The party is steadily building a national political support base ahead of Marine Le Pen's presumed run for president in 2017.