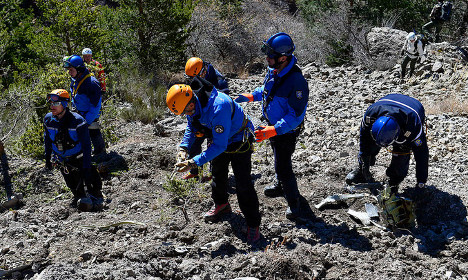 Rescue teams at the scene of the crash sift through the rubble. Photo: AFP

French prosecutor Brice Robin told reporters on Thursday that the condition of the second box "gives us reasonable hope that it can be used."

The second black box measures data such as speed, altitude and pilot action and will be an "indispensable" element in the investigation, Robin said.

All 150 people on board Flight 4U9525 from Barcelona to Dusseldorf were killed when it crashed into the Alps last week in the bloodiest such disaster on French soil in decades.

Robin said 150 DNA strands had been isolated but stressed this did not necessarily mean all the victims had been identified.

Identifying the remains of everyone on board would take "three to five weeks," he said.

The first black box voice recorder, which was found soon after the crash last week, suggested that co-pilot Andreas Lubitz deliberately locked the plane on a collision course with the mountains.

Investigators have already solved a great deal of the mystery of Flight 4U9525 thanks to these recordings, which revealed that the 27-year-old co-pilot was alone at the time of the crash.

He apparently took advantage of the captain's brief absence to lock him out and set the plane on a deadly descent into the Alps.

The plane smashed into the mountains at a speed of 700 kilometres an hour, instantly killing all passengers and crew on board — half of them German and more than 50 from Spain.

According to prosecutors, the voice recorder suggested that the passengers were unaware of what was going to happen to them until the very last seconds, when screams were heard.

Rescue workers have since been sifting through the wreckage for days trying to identify body parts and victims via their DNA.

The search for evidence has been hampered by the extremely difficult mountain terrain as well as the force of the crash.