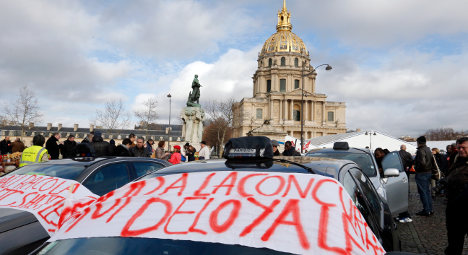 The court was expected to rule on the legality of UberPop – a smartphone application, which puts non-professional drivers with their own cars in touch with passengers via their mobile phones or a website, for rides at budget rates.

UberPop is technically illegal in France, thanks to a new raft of laws brought in last year but the company is appealing a €100,000 ($113,000) fine it received last year.

Until the court makes a final decision the app is still allowed to function.

Last month French police raided the Paris offices of Uber as part of its investigation.

Nevertheless with the court of appeal putting back its decision until September the UberPop app can continue as normal to put clients in contact with drivers.

However in the meantime police can still handout fines if they catch the drivers.

Uber has filed complaints with the EU against France, Germany and Spain as the popular taxi app hits back against efforts to ban it from Europe's streets, officials said Wednesday.

The US-based firm's legal appeal to the European Union comes amid an increasingly tense battle with regulators and traditional cab drivers in several European countries.

Uber argues that efforts by national governments to shut it down breach EU laws on competition and the single market, according to copies of the complaints seen by AFP.

The challenge against Spain was filed on Monday, while those against France and Germany were filed in late January and February respectively.

"We are carefully assessing the complaints," said Jakub Adamowicz, a spokesman for the European Commission, the EU's executive arm that oversees Europe-wide regulation.

He said the outcome depends largely on whether the commission accepts Uber's argument that it is merely a mobile phone app and not a transport
company.

"Uber is a technology, but it is a technology that has an impact on transportation," Adamowicz said, adding that EU member states "have a very important role to play".

If Brussels finds EU rules have been violated, it can launch in-depth investigations that could ultimately bring penalties and fines against the
national governments.

Uber uses mobile phone apps to put customers in touch with private drivers who then take them where they want to go, at prices lower than those of
traditional taxis.

But despite its growing popularity, Uber is facing increasing limits on its activities in EU countries and a barrage of legal challenges spurred on by a furious taxi lobby, who say Uber drivers should be regulated the same way as normal cabs.

Legal wranglings are also heating up in the Netherlands.

Meanwhile in Brussels last month, a gang of taxi drivers assaulted Uber rivals, angered by a possible compromise between Belgium authorities and the app.

Uber's complaints cite bloc rules on e-commerce and technological neutrality, jurisdictions over which the EU has significant say.

The 28-member EU however has little power over transportation policy, largely the remit of national authorities.