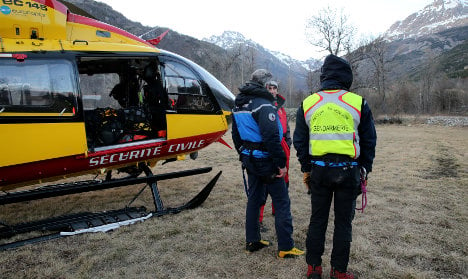 A rescue team near the scene in the French Alps. Photo: AFP

Two Austrians and an Italian were killed on Wednesday when an avalanche hit the Alpine Ecrins National Park in south eastern France. Another Austrian was left in a critical condition, and at least six other people were treated for shock after being swept away in the snow.

Not far away in Dévoluy, another two off-piste skiers lost their lives shortly afterwards.

Staff from the Austrian embassy in Paris had travelled to the Alps to work with the local crisis team and assist where they could, reported The Local Austria.

The avalanche struck just after 3pm on the slopes near the town of Villar d'Arène, and a team of over 50 firefighters and specialist police rescuers with sniffer dogs were dispatched to help with the search, but winds of over 80 kilometres an hour complicated the task.

Witnesses quoted by France 3 Alpes said the avalanche was "spectacular".

The avalanche risk in the area was between 2 and 3 at the time on a scale that reaches as high as 5. (The Ecrins National Park in the Hautes-Alpes. Photo: Google Maps)