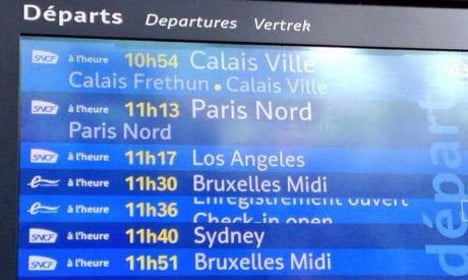 The departure board in Lille. Photo: SylvieBRawlings/Twitter
Yes, the French get involved in April Fool's too – or as it's known here – Poisson d'Avril (April Fish).
Giraffe yoghurt?
France 3 TV channel turned heads when they reported that a zoo in Bretagne was offering giraffe yoghurt to visitors. The paper reported that staff were milking their lactating giraffe mother, Kimba, and turning the milk into yoghurt as an experiment.
Real chickens in Easter eggs?
According to France Bleu, Belfort chocolate maker Thierry Kleiber has decided to put live chicks in a few of its chocolate Easter eggs this year. Mr Kleiber reassured animal protection groups saying “It is not a problem to put live chickens in chocolate eggs: they are young and don’t move that much. We make them a nest and make sure they have a few holes to breathe through.”
Drone porn?
Other channels and news websites put spins on current affairs, such as the Nouvel Observateur, which reported that the recent sightings of drones around Paris were actually sent out by people in the porn industry. Three men were arrested, they claimed, trying to film intimate scenes through people's windows.
The paper included a video called "drone boning", which showed aerial scenic footage that featured people making love in public. Click here to read the story, and watch the video below if that's your thing (WARNING – this film clip contains sex scenes, viewer discretion is advised).
Trains from France to the US?
Staff at Lille train station in northern France were raising passengers' eyebrows when their departure board featured trains for Los Angeles and Sydney.

France to increase 35-hour working week?
Newspaper La Tribune reported that France's 35-hour working week will be increased to 36.37 hours. The "news" was revealed after a secret meeting on Monday night between Prime Minister Manuel Valls, Labour Minister Emmanuel Macron, and President Hollande at the Elysée Palace.
Emmanuel Macron said it was "a decision which will significantly lower labour costs". A reporter from La Tribune exclusively reveals that Macron was as comfortable as "a fish in water" during the whole meeting.
French volcano wakes up?

The largest volcano in Europe could be waking up, the tourist site Cantal Destination told readers on Wednesday. According to the site two hikers reported having seen strange smoke coming out from the extinct Puy Mary volcano in the Auvergne region.

Vulcanologist specialist who worked on the eruption of the Eyjafjallajökull volcano in Island in 2010 are now on their way to the site to determine whether the Puy Mary is now awake. Lets hope for everyone living in the region that it remains well and truly asleep.

Noisy tourist ban in Paris?
Here at The Local France, you may have guessed that our story about a provocative campaign by French restaurant owners to get tourists to shut up while dining was nothing but a lie. But it certainly got the commenters going, and we will return to the subject soon. Our story included exclusive footage of a loud-mouthed foreign tourist being thrown out of a bar and snaps of campaign posters taken by shocked readers.
Elsewhere in Europe…
As for The Local Europe, here is a taste of what we had in store as we lost our marbles for the morning.

At The Local Sweden, we had most of you fooled with our film centring on an isolated Swedish town that says “no” in a surprisingly Scottish way. While the story was a total lie, you maybe saw our viral video about the strange sound northern Swedes make to mean “yes” – which was actually true.

Elsewhere in Scandinavia, The Local Norway broke the news that farmed reindeer have become “Norway’s new salmon”, to the delight of the country’s hard-pressed farmers – and no doubt the fury of animal rights activists.

And in Denmark, home to the world’s best non-native English speakers, PM Helle Thorning-Schmidt apparently announced that the Nordic country would be designating English as an official second language.

Or perhaps you were left with egg on your face after reading The Local Spain’s story about how Benidorm is clamping down on a culinary favourite of many tourists: the full English breakfast.

Over in Austria, garden gnome enthusiasts got hot under collar after reading about a proposed hike in sales tax for the ornamental dwarves.

In a move likely to stir up Italian wrath (if only it were true), American pizza makers claimed that the US is the true homeland of pizza – and the UN chose Neapolitan pizza as its candidate for protection under Unesco’s Intangible Cultural Heritage List.

In Germany, Chancellor Angela Merkel made the extraordinary announcement that the country had taken inspiration from the British and would re-establish the monarchy.

And, finally, neighbouring Switzerland decided to resurrect its bicycle infantry for the Swiss Army. Cycling up and down Alpine passes, it was felt, would improve levels of fitness in recruits.