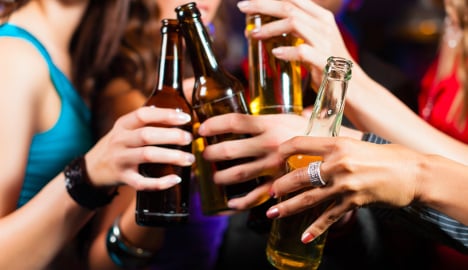 Binge drinking is becoming all the more common in France. Photo: Shutterstock
'Le binge drinking' is becoming all the more common among French people between the ages of 18 and 25, new figures from the National Institute of Prevention and Health Education (INPES) revealed.
Around 46 percent of French people in that age group have participated in "binge drinking" at least once in the last year, compared to just 33 percent ten years ago. Meanwhile, those in that age group who have done it three times in the last year has almost doubled from 15 to 29 percent.
Binge drinking is the drinking for the express purpose of getting drunk, or drinking copious amounts of alcohol in a short period of time. (France plans to make binge drinking illegal. Photo: I woke up Today/Flickr)
François Bourdillon, the head of the organization, said the drinking culture was influenced from abroad.
"This is an Anglo-Saxon phenomenon that's starting to creep into the generation of the 15-24-year-olds" he said in a statement.
Fourteen percent of French people in the age bracket admitted to binge drinking at least once, compared to 10 percent of 25-34-year-olds and 6 percent of 33-44-year-olds.
The statistics revealed that there was a definite upswing among young women's binge-drinking habits, with those admitting to binge-drinking at least three times in the past year rising to 28 percent. This figure stood at just 8 percent in 2005 and 19 percent in 2010.
Bourdillon noted that besides the concerns for the health of young drinkers, binge drinking can also lead to violence against women, sometimes fatal drunken accidents, and unprotected sex.
The news comes in the same week that Health Minister Marisol Touraine has presented her new health bill to the government, a bill that includes reforms to crack down on France's binge drinking culture.
READ ALSO: Eight reforms you should know from the new health bill "We have to put a stop to drunkenness that does such damage to young people," Touraine said when she released the reforms in October.
"Directly provoking a minor to excessive consumption of alcohol will be punished by a year imprisonment and a fine of €15,000," the text of her law says.
Anyone who incites someone else to "drink until drunk" will be liable to six months in prison and a fine of €7,500.
France has banned "binge drinking" before, but only in the sense of the word. The Local reported in 2013 how the French language police at the ministry of culture officially introduced the term "beuverie-express" (fast-drinking) to replace the English-language version.