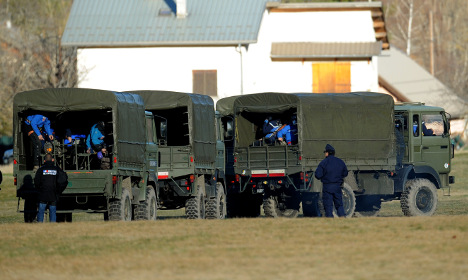 Three trucks set off from the dropzone in Seynes-les-Alpes early in the morning after a hectic 48-hour road-building operation to ease access to the remote mountainside.

"It means we can work work faster, later and bring back more items," said one police officer.

Trucks now take 45 minutes to reach the base of the rocky slope where debris remains spread across some two hectares, while two helicopters hover over head to check for pieces that may have been flung further.

Somewhere in there lies the second "black box" recorder, which gathered technical data on the flight, and has yet to be found.

Search teams are having to dig into the loose earth on the assumption the black box has been buried, the policeman said.

He added they have removed "more than 4,000 pieces" of plane and human remains.

The search was expected to finish by April 8, after which a civilian clean-up group, funded by airline owner Lufthansa, will tidy up the site.

It is exactly a week since the Germanwings jet crashed into the French Alps, killing all 150 on board instantly.

French investigators said on Tuesday they would now concentrate on "the systemic weaknesses" that might have caused the disaster, including the logic of locking cockpit doors from the inside, which was introduced in 2001 to stop terrorist attacks.

It said it would also look into procedures for detecting "specific psychologic profiles" in pilots after indications that Lubitz may have suffered from depression.

Authorities believe co-pilot Andreas Lubitz deliberately locked the plane on a collision course with the mountain and are scouring his background for a possible motive.

Insurers set aside €279m for payouts

Meanwhile insurers in Germany are setting aside €279 million in provisions for the air crash in the French Alps that killed 150 people, German airline Lufthansa said on Tuesday.

The sum includes financial compensation for the families of the people who died and the cost of the Airbus A320 jet itself, which belonged to the low-cost carrier Germanwings, a spokeswoman for parent company Lufthansa told AFP.

She was confirming a corresponding report in the financial daily Handelsblatt.

According to Handelsblatt, the consortium of insurers is headed by German giant Allianz.

When contacted by AFP, Allianz was not immediately prepared to comment.

The Germanwings flight en route from Barcelona to Duesseldorf crashed a week ago.

Investigators evaluating voice recorder data say co-pilot Andreas Lubitz apparently locked his captain out of the cockpit and slammed the plane into a French mountainside.

The flight crashed at a speed of 700 kilometres (430 miles) an hour, instantly killing all on board.

On Monday, the director of operations at Germanwings, Oliver Wagner, had said that the company would immediately compensate each family with €50,000 euros.

This sum would not be deducted from any final compensation deal.