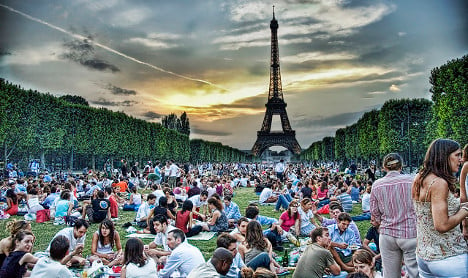 Picnics are a sure-fire way to save a euro or two. Photo: Trey Ratcliff/Flickr

If France and Paris have a reputation for anything, it is for food glorious food.

Mention the city at all and even before the first cliched connotations of lovers on a bridge or schoolchildren in berets, the images that spring to mind are all gastronomic: stinky cheese aisles in the supermarket, cloves of garlic, haughty garcons wearing aprons and looking disgruntled in steamy windows of tiny bistros and street after street full of the devastatingly seductive aroma emanating from any one of the million and one boulangeries. "You must be eating like a queen!" everyone from home wistfully sighs when I talk to them. HA. If Marie Antoinette ever sat in her apartment eating boiled eggs and broccoli then yes, I eat like a queen. Food in Paris may have earned its reputation as golden but it is not exactly kind to the student's already scant pocket.

However, after an initial week or two of eating sweetcorn and ketchup and dreaming of Heinz beans, I realised there is indeed a way to navigate the food and drink of the city without having to sell a kidney. You just have to be a little prepared.

Embrace what the locals eat. In classic Gallic fashion, you mould to Paris because it has no intentions of changing for you and if you're doggedly determined to stick to the same way of eating as you did at home, you're going to pay a lot for it. An element of yieldability is crucial to avoid sinking into Les Miserables-esque trenches of poverty so wave goodbye to your marmite on toast (€8 for a jar when you can find it!) After all, it's not exactly a chore to embrace the fresher produce. Whilst a half loaf of limp sliced bread in your average supermarket is going to cost you €2.90, a freshly baked baguette is all of 90 cents. There are certain things you just cannot find here (you’re going to have to search hard for honey nut cheerios, and chocolate hobnobs) but in a city where virtually every corner offers you Nutella crepes (for €3 if you're lucky), I say out with the old and in with the new.

For the love of God bring a french dictionary along with you on your first solo endeavour to the supermarket, lest you come away with a package of eels (!!) to cook up for dinner, innocently assuming them to be nothing more malignant than some humble plaice.

When you can, eat al fresco. A baguette, a tomato, a packet of jambon and a bottle of wine will give you ample change from a tenner (a fiver if you cut the wine) and feed two hungry humans happily. Splash out more by adding a couscous salad or going to a boulangerie and buying a package of freshly made madeleines (delicious eaten with fruit salad). (It doesn't have to be only baguettes (but it helps). Photo: Private;Julie Kertesz/Flickr)

Keep all this in mind but don't be a miser. Paris is brimming with delicious tastes and every kind of culinary delight you can imagine and, foodie or not, it is a quintessential part of the experience to recklessly indulge sometimes. Just don't be stupid about it. Avoid tourist traps, like the restaurants at Place Du Tertre, in Montmartre and never order soft drinks with food (sticking with tap water will help keep costs way down). Also, eating out for lunch instead of dinner is a surefire way of shaving at least €10 off your meal. (And since all bread is a delight in Paris, there is NO shame in tipping the leftover contents of the complimentary bread basket into your bag to munch on later…There may be a little shame).

If you want to have an authentic French dining experience, Gladines is a universally celebrated institution. There are several branches (in Saint Germain and Les Halles among others) and you can get steak frites or duck confit for less than €10. The dream.

In addition to this, Paris has so much fantastic street food that (weather permitting) is a cheap yet delicious alternative to sawing through a hunk of meat in a cramped bistro. Try all the different ethnic cuisines at Le Marché des Enfants Rouges on a Saturday afternoon. Another foodie must-do is a takeaway falafel from any of the vendors in Rue de Rosiers (instructions for eating: receive falafel, promptly disregard all social etiquette and sit on the cold stone ground, devouring said falafel as fast as your mouth will allow). Late night (read: drunk) food is not as easily found here as it is at home in Dublin. Even good ol' reliable Chez McDo's (McDonald’s to you and me) closes its doors at midnight in many places. To save yourself trawling the Parisian streets at 5am (or even worse racking up a gruesome taxi bill in the hunt for chicken nuggets like they're the holy grail) keep a box of cereal and milk, or a giant bag of Lays Ready Salted crisps, in your cupboard for these desperate moments. Both you and your purse will be thanking you the next day.

Read more about being a student in Paris:

The trials and tribulations of being a foreign student in Paris

How to live on a student budget in Paris