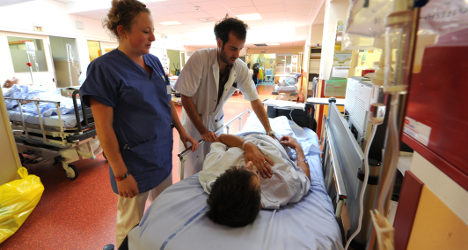 Here's what you need to know about France's new healthcare bill. Photo: AFP

France is known for its excellent healthcare system as well as the long life expectancy rates of its residents, but the country still has significant health-related issues its trying to fix.

Under a sweeping health reform bill that has already seen doctors striking across the country on several occasions in the last month, Health Minister Marisol Touraine is targeting some of the most critical problems.

France’s national healthcare insurance system, the "Assurance Maladie", aims to use the reforms to make €10 billion in cuts over the next three years.

Here are eight major points in the bill:

Smoking crackdown: In an effort to take some of the glamour out of smoking, Touraine’s bill proposes wiping the colourful branding and well-known logos off cigarette packs. She also plans to outlaw e-cigarette use in certain public places like parks where children are present. The crackdown on smoking also includes a plan to ban the habit in cars with children in. Despite France’s reputation for healthy living, smoking is a major problem here and it’s tied to 73,000 deaths per year.

Clean rooms for drug users: Touraine is hoping to at last lay the groundwork that would allow for trial runs of a limited number of so-called "shooting galleries". These are places where intravenous drug users would have access to clean needles, sanitized facilities and access to drug counselors. However the project has been endlessly delayed by opponents who view the plan as coddling hard drug users.

Binge drinking ban: If it is passed, people who encourage minors to drink excessively could face a year behind bars and a €15,000 fine. And anyone who incites others to “drink until drunk” could face up to six months in prison as well as a fine into the thousands.

Digital doctors records: France already has a system whereby patients’ records are supposed to be digitized, but it never really took off. So Touraine is giving it another try, this time putting the Assurance Maladie in charge of the initiative. Digital records are seen as the future for hospitals around the world and help doctors coordinate care, but also provide a means to keep patients informed and involved.

Payment-free doctors visits: The bill would end the current system that sees patients cover part of the cost of a doctor’s visit. It would come into effect for special cases by 2015 and by 2017 for everyone. The idea is to better prevent illness, which is less costly and produces better results than trying to treat a problem that’s long gone unchecked.

Abortion rule changes: The reform aims to get rid of the seven-day "cool-off period" for getting an abortion, which is in place to allow patients a chance to change their mind. Women must currently wait a week between two medical consultations in order to be allowed an abortion. In emergency cases, for example if the woman is approaching her 12th week of pregnancy, this seven-day period can be reduced to 48 hours.

Organ donation register: The new reforms say that people should have to sign up to NOT be on the organ donor list. France currently works on a system of assumed consent, but if the reform gets through, French people will have to sign a national registry saying they don't want their organs donated to circumvent this. It would come into place in 2018.
Cancer survivors' right to be forgotten: Touraine's reforms say that anyone in France who is 100 percent cured from cancer has the right to have their medical record "forgotten". This means that when they're applying for jobs or requesting loans, they can avoid any potential forms of discrimination.