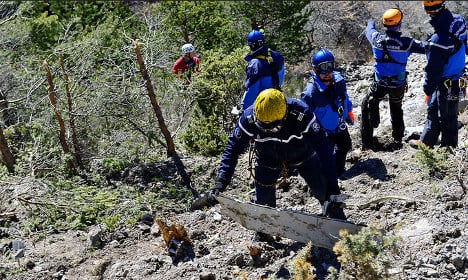 A huge recovery operation is underway at the crash site to try and identify the bodies of the victims.

French President Francois Hollande said that it would be possible to identify all the victims of the Germanwings crash in the French Alps by the end of the week.

He told a joint press conference with German Chancellor Angela Merkel that French Interior Minister Bernard Cazeneuve had confirmed that "by the end of the week at the latest, it will be possible to identify all the victims" due to DNA and "exceptional" scientific work.

A huge and harrowing recovery operation is underway to try to recover body parts from among the masses of debris at the scene of the crash.

Rescuers who have visited the scene have described how everything was "pulverised" and there were no body parts ébigger than the size of a briefcase".

French authorities had initially warned that it could take weeks if not months for all of the 150 bodies to be identified. Although on Saturday it was revealed that as many as 80 victims had already been identified due to DNA

Somewhere in there lies the second "black box" recorder, which gathered technical data on the flight, and has yet to be found.

Search teams are having to dig into the loose earth on the assumption the black box has been buried, the policeman said.

He added they have removed "more than 4,000 pieces" of plane and human remains.

The search was expected to finish by April 8, after which a civilian clean-up group, funded by airline owner Lufthansa, will tidy up the site.

It is exactly a week since the Germanwings jet crashed into the French Alps, killing all 150 on board instantly.

French investigators said on Tuesday they would now concentrate on "the systemic weaknesses" that might have caused the disaster, including the logic of locking cockpit doors from the inside, which was introduced in 2001 to stop terrorist attacks.

It said it would also look into procedures for detecting "specific psychologic profiles" in pilots after indications that Lubitz may have suffered from depression.

Authorities believe co-pilot Andreas Lubitz deliberately locked the plane on a collision course with the mountain and are scouring his background for a possible motive.