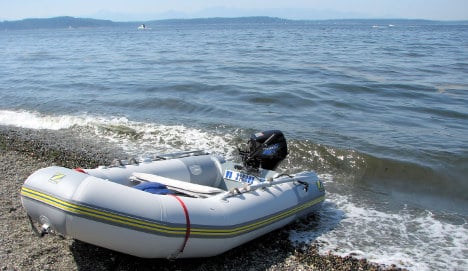 The inflatable boat in this picture is not the one that underwent CPR in the story. Photo: Rootology/Wikimedia Commons
Ever had such a big Saturday night that you ended up confusing a lifeboat with a lifeless body?
Well that was the reality for one drunken 22-year-old, who was found by police in a shipyard just after 4am on Sunday in the western town of Vannes.
Officers noticed the man kneeling by an inflatable boat and went to investigate, reported French newspaper Le Télégramme.
"He was underneath a boat, on his knees, trying to resuscitate a rubber dinghy," local police told Le Télégramme.
The man told officers that someone was unconscious inside the vessel, but upon closer inspection officers discovered the young man was instead performing CPR on the inflatable boat itself.
To make matters worse, he had already called out firefighters to the scene – an emergency call that the police promptly cancelled.
Police took the Frenchman to prison to sleep off his hangover and recover his senses.