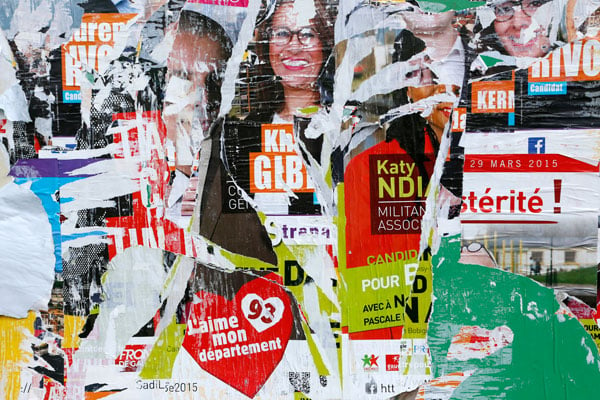 The polls come as all parties fix their sights on 2017 presidential elections in which Sarkozy hopes to wrest power back from President Francois Hollande's leftist government that has struggled with a sluggish economy and high unemployment.

Sarkozy's centre-right coalition is likely to dominate Sunday's ballot after topping last week's first round vote, putting him back in the limelight after a sluggish return to politics in September.

"Change is underway, and nothing will stop it," he said after his UMP-UDI alliance took 29 percent last week.

The far-right National Front (FN), which came second with 25 percent, has sought to manage expectations, with Le Pen saying she does not expect to win any departments (French administrative areas), due to tactical voting by the mainstream parties to keep them from power.

But the FN could still emerge in control of at least two departments – a first for the party, and a further boost after it won several town halls and came first in the European elections last year.

Meanwhile, Hollande's Socialists did better than expected, taking 21.8 percent of the first-round vote, but government officials fear it may lose between half and two-thirds of the 60 councils it currently controls in the run-off round.

Sarkozy had been criticised since his return for being distant, preoccupied and even bored. But his energetic leadership of the current campaign has restored some of his allure.

"If results match the forecasts, the right's victory will help repair damage Sarkozy inflicted on himself with his weak, sleepy start," political analyst Stephane Rozes, president of the CAP political consultancy in Paris, said.

"It will also signal he has appreciated the importance of the centrist vote, which he ignored in 2012 as he shifted his position farther to the right to rival the FN."

The Socialists are heading in the opposite direction after a campaign that mostly focused on the threat of the far right, and said little about key economic issues.

A boost in Hollande's poll ratings after the January attacks in Paris proved short lived.

"Everyone in the (Elysee) is scared he will be eliminated in the first round in 2017," a presidential advisor told AFP, adding that Hollande had no choice but to continue unpopular budget-cutting reforms that have alienated the public and many in his own party.

Gilles Finchelstein, a political strategist close to the Socialists, painted an even darker picture this week in an article for L'Express magazine, saying "the left is in danger of dying, (and) risks becoming nothing more than a residual political force".

There is still hope for the Socialists, said Rozes, since voters approach local elections very differently from national contests.

"You can't project results from one to what will occur in the others," he said.

The same is true for the far right, according to analysts, despite claims from Socialist Prime Minister Manuel Valls that Le Pen "is at the doors of power."

"(But) despite what you hear these days, it's mad to imagine Marine Le Pen in the Elysee."