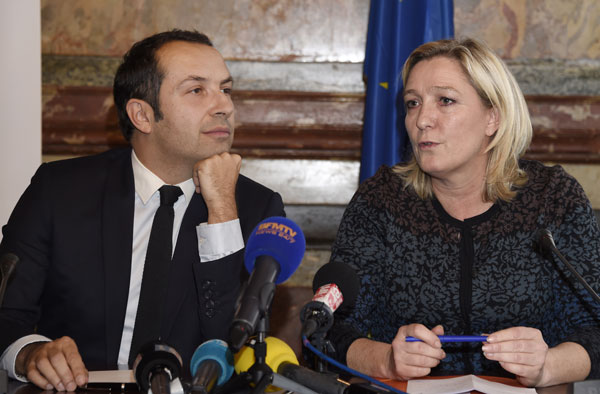 Sebastien Chenu, a former gay activist, does not seem a typical member of France's far-right National Front (FN), a party accused of deeply reactionary views with a history of homophobia.

"The National Front is the only party whose leader is a woman and its deputy leader is gay," he points out over a glass of Chablis in Beauvais, the northern town where he is standing as a candidate in local elections this week.

"Marine Le Pen represents a sort of absolute freedom in a political world that is very policed, where everyone resembles each other. She has come in and shaken things up," he says.

But it is not long into talking with Chenu that the limits of that freedom become apparent.

Roma "poison the daily life of Parisians"; immigrants "reproduce cultures that destabilise areas of towns… It's not for us to integrate them, it's for them to assimilate themselves," he says.

Gay support for the FN is rising: a recent Ifop poll showed 26 percent of homosexuals in Paris supported the party, compared with 16 percent of heterosexuals.

The presence of several gays in Le Pen's entourage, including deputy leader Florian Philippot, marks a sharp change from the days of her father and predecessor, Jean-Marie, who was known for phrases like: "homosexuality…constitutes a biological and social anomaly."

But that has less to do with a more open attitude to minorities in the FN than the emergence of more racist attitudes among parts of the gay community, says author Didier Lestrade, who has written a book on the subject.

"The LGBT community was always rooted in diversity, but recently racism has come out in the open and we see more and more LGBT people seduced by the FN," he says.

Lestrade blames fear-mongering among parts of the gay community, particularly towards Muslims for their perceived homophobia.

But he agrees with Chenu that a closeted political establishment has pushed homosexuals towards fringe parties.

"The paradoxical situation is that the National Front is one of the few places where homosexuality is not an obstacle."

And as one gay activist, waiting to heckle Le Pen at a recent campaign rally, told AFP: "LGBT have diverse political opinions. They can be just as stupid as anyone else."

The shift in attitude towards gays is one part of the "de-diabolisation" (detoxification) campaign launched by Marine Le Pen since she took over the party in 2011, seeking to make the party a more palatable alternative to the discredited mainstream.

It helped lead the FN to first place in last year's European elections and a quarter of the votes in the first round of last week's local polls.