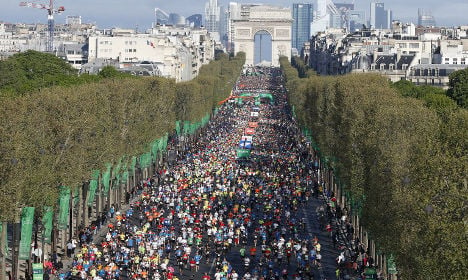 Runners at the annual Paris marathon. Photo: AFP
Easter Hunt, Paris, April 21st
You're never too old for an Easter egg hunt. To celebrate Easter, Paris City Hall is organising this unusual Easter hunt where 300 chocolate hens will be hidden in rent-a-bike Vélib stations throughout the capital. To find them, follow the clues appearing every hour on the Vélib twitter account on the D-Day under the #Roulemapoule hashtag.
Paris Marathon, April 12th (The marathon in 2014. Photo: Thomas Samson/AFP)
One of Europe's favourite marathons is approaching, but unless you've already purchased your own pass then you'll have to be participating as a spectator, as the race has sold out its 50,000 places already.
The race which will start at the Champs-Elysées avenue, and pass by the Notre Dame Cathedral, the Orsay Museum and of course, the Eiffel Tower.
A mini marathon is even organised for children between the ages of five and ten, with activities on the side like live music and face painting.
PIAF – Edith Piaf exhibition, François Mitterrand Library, April 14th to August 23rd
In honour of what would have been the 100th birthday of “La Môme” [The Little Sparrow – as Piaf was known in France], the François Mitterrand Library is turning Edith Piaf's life into an exhibition.
Piaf was the daughter of entertainers, and rose to fame in the 1930s to become one of France’s most iconic figures. Photographs, letters, magazines, memorabilia, and CDs will trace back the life of the singer, who was also nicknamed “Little black dress”, and who was portrayed by French actress and Academy Award Winner Marion Cotillard in the film La Vie En Rose.
Foire de Paris, Porte de Versailles, April 29th to May 10th (Visitors getting a taste of one of the food stands of the Paris fair in 2010. Photo: Fred Dufour/AFP)
Whether you have just moved to a new home or are curious about new technology, this annual exhibition is a must see. Now running for 111 years in Paris, the fair focuses on five different areas of our daily life: house and lifestyle, wellbeing, fashion and accessories, leisure and everyday life and regional wine and gastronomy.
This year, the fair is even hosting a music festival, welcoming Tahitian dancers, and bringing novelties including cooking and DIY workshops groups, fashion shows and a pétanque strip.
France’s prettiest villages wine market, Rodemack, April 11th & 12th (Rodemack fortress makes it one of France's prettiest villages. Photo: Moselle Tourisme/Flickr)
Nicknamed the “Land of the Three Frontiers” for its proximity to Germany and Luxembourg, the fortified town of Rodemack in Moselle, eastern France, will be hosting a wine festival in April.
France’s prettiest villages wine producers such as Alquèze in the south west and Riquewihr, in the North East, will come for the occasion and offer their best wines, including Côtes du Rhône, Pinot noir and Riesling.
Spi Ouest-France Intermarché: Sailing race, La Trinité sur Mer, April 2nd to 6th (The sailing competition on the southern coasts of Brittany. Photo: Marcel Mochet/AFP)
Sailing enthusiasts can look forward to this four-day race, taking place in the Quiberon Bay, on the southern coasts of Brittany. Launched in 1978, Europe’s largest sailing boat race should gather over 500 boats and 3,000 sailors this year. The uniqueness of this competition lies in the fact that amateurs and professionals such as Loïc Peyron, are invited to take part.
Chartres in Lights, April 11th to October 10th (Chartres cathedral enlightened at the 11th edition of the festival last year. Photo: Charly Triballeau/AFP)
The north-eastern town of Chartres, which boasts a cathedral that's listed as a Unesco World Heritage site, welcomes a light festival every year where the main landmarks are illuminated to the sound of music.
Twenty nine of them will display artists’ creations, and visitors can enjoy a percussion show, enlightened dances, and an orienteering course for families.
30th anniversary of the Geode at the Cité des Sciences, Paris, April 7th to July 5th (The Géode cinema at the La Villette leisure park. Photo: Pierre-Franck Colombier/AFP)
The biggest cinema screen in Paris is releasing a series of movies and documentaries to celebrate its 30th anniversary. Spectators can enjoy a unique experience in the hemispheric cinema, watching documentaries such as “Pandas 3D”, “Rolling Stones at the Max”, and even family hit Madagascar.
Spectators can vote for the best documentary of the event, which will be screened in October at the very same cinema. Weekends will see mammoth movies about dinosaurs too, so be prepared for a rip-roaring good time.
Printemps de Bourges music Festival, April 24th to 29th
Over 100 artists will perform over the course of this five-day music festival, located in the centre of the country. For its 39th edition, a variety of music styles including electro, middle-eastern waves and rock and beat, will resound thanks to award-winning singers such as Selah Sue or Christine and the Queens performing their best hits on stage. A tribute to jazz legend Nina Simone is also scheduled.
Saut Hermès au Grand Palais, Paris, April 10th to 12th
The Grand Palais is this year hosting one of the world’s most prestigious show-jumping competitions, where some of the best horses and riders will demonstrate their skills. Horse riding fans that do not get a ticket will still have a chance to enjoy the two main showcases of the event thanks to a big screen broadcasting it on Paris City Hall Square, on the afternoon of Sunday the 12th.
By Priscillia Charles