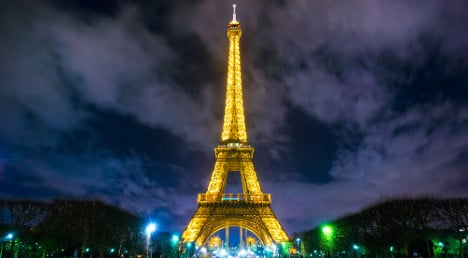 On Saturday over 200 buildings in the French capital will go dark for an hour between 8:30pm and 9:30pm to mark the ninth edition of “Earth Hour”, a global initiative to raise awareness about climate change, Le Parisien reported.

The buildings include some of Paris’s most popular landmarks including Hôtel de Ville, Parc des Princes, Notre-Dame and the opera houses.

Due to "security reasons", the Eiffel Tower, which is Paris’s tallest structure, will only go dark for five minutes.

To add a bit of festive flavour to the occasion, Parisians are then encouraged to dance on a special surface installed at the foot of the monument to restore the monument’s lights.

On Thursday leaders of 30 European cities gathered in Paris for a summit to declare their commitment to "clean" policies in the battle against climate change, and to sign a declaration promising to use their collective purchasing power of around €10 billion a year to buy eco-friendly.

This isn’t the first time the lights on the world-famous tower have been dimmed.

In January the tower’s lights were dimmed to honour the victims of the Paris terror attacks.