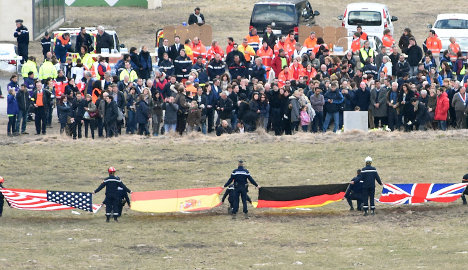 Rescuers hold American, Spanish, German and British flags infront of the relatives of the victims of the plane crash on Thursday. Photo: AFP

Families and friends of victims gathered near the remote mountainous crash site area in the French Alps on Thursday.

The relatives of the Germanwings Airbus A320 crash victims attended a wreath-laying and remembrance ceremony as rescuers (Front) held flags of the passengers' nationalities, in the small village of Le Vernet. (International press also gather at the scene of the crash as the families arrive. Photo: AFP) (Rescuers hold flags of the nationalities of all the victims of the crash. Photo: Pascal Guyot/AFP) (Relatives arrive at the scene of a makeshift shrine to the victims. Photo: Pascal Guyot/AFP) (Families line up to lay wreaths at a memorial to the victims of the crash. Photo: AFP)

Tents were set up for families to give DNA samples to start the process of identifying the remains of the victims, at least 50 of whom were Spaniards and at least 75 Germans.

Remains found scattered across the scree-covered slopes were being taken by helicopter to nearby Seyne-les-Alpes.

One investigator said the operation would take at least a fortnight.

The crash site, which is situated at about 1,500 metres (5,000 feet) altitude, is accessible only by helicopter or an arduous hike.