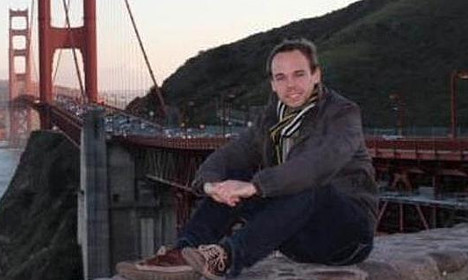 The newspaper said it had seen internal documents and Lufthansa sources, which confirmed that Lubitz had spent one and a half years in psychiatric treatment.

It reveals that Lubitz was briefly listed as “unable to fly” during his training in Phoenix, Arizona and had to repeat several parts of his training.

Bild also discovered that his personnel file at the German Air Travel Authority (Luftfahrtbundesamt) was marked with the code “SIC” – indicating that he was subject to regular medical checks, as was his pilot's license.

He was under medical treatment for a total of 18 months, Lufthansa sources told the paper.

Lufthansa CEO Carsten Spohr said that Lubitz had suspended his pilot training, which began in 2008, "for a certain period," but did not give more details. Lubitz later continued and was able to qualify for the Airbus A320 in 2013.

Bild said that during the period of his training setback Lubitz had suffered "depressions and anxiety attacks."

The pilot's records were due to be examined by experts in Germany Friday before being handed to French investigators, Bild reported.

Police searching a home of the German co-pilot who officials say appears to have deliberately crashed a plane into the French Alps said Friday they had seized evidence but no "smoking gun".

Officers combing through a flat kept by Andreas Lubitz in the western city of Duesseldorf said they had seized "various items and papers", police spokesman Marcel Fiebig told AFP.

"We will see whether this will explain what happened — everything is being examined," he said, adding that there was no "smoking gun" to shed light on a possible motive.

Two properties used by Lubitz in western Germany were searched by police late Thursday as officials seek clues into how the outwardly level-headed pilot could have decided to commit what is thought to have been suicide and mass murder.

READ ALSO: What we know about Andreas Lubitz (The front page of German newspaper Bild on Friday. Photo: The Local.)

Those who knew Lubitz have been reacting with shock at the news that authorities believe he alone is to blame for the crash.
"He was a completely normal guy," Klaus Radke, the head of the local flight club where Lubitz received his first flying license told Reuters.
"I got to know him, or I should say reacquainted with him, as a very nice, fun and polite young man."
"I'm just speechless. I don't have any explanation for this. Knowing Andreas, this is just inconceivable for me," added Peter Ruecker, a long-time member of the flight club who knew Lubitz well.
"Andreas was a very nice young man who got his training here and was a member of the club," Ruecker told Reuters. "He was a lot of fun, even though he was perhaps sometimes a bit quiet. He was just another boy like so many others here."
The town of Montabaur, near Dusseldorf, where Lubitz was from, was in shock on Friday after the revelations that he deliberately downed the plane.

"I would like to know, why he did that and for how long was he thinking about it," one resident told RMC radio.

The revelations dominated the front pages of newspapers around the world on Friday, with many talking of his "crazy act" and "murderous folie". Other media were asking the question why was the co-pilot able to get behind the controls, despite his record of depression.

Mental Health groups criticized Britain's Daily Mail newspaper for their front page headline on Friday which read "Why on earth was he allowed to fly?"

Winston CHURCHILL had a history of depression: why was he ever allowed to lead us? – pic.twitter.com/ydGC4zuRI3 << What an appalling headline!

It also emerged on Friday that the pilot who was locked outside the cabin had used an axe to try to smash down the cockpit door.

This could not be immediately confirmed, but a spokesman for Germanwings confirmed to AFP that an axe was on board the aircraft.

Such a tool is "part of the safety equipment of an A320," the spokesman told Bild.

READ ALSO: Can nightmare of pilot downing plane be prevented?