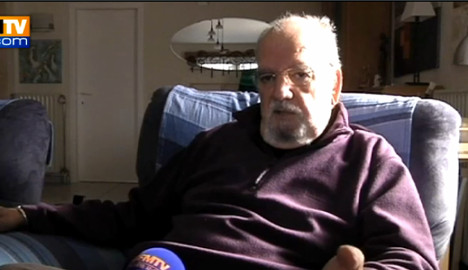 Claude Driessens, who lost his brother Christian in the plane crash. Photo: BFMTV

The mayor of the German town of Haltern, which lost 16 students and two teachers in the Germanwings plane crash spoke about the “nightmare” being endured by the families.

“It’s bad enough for the families to learn of the death of loved ones in an accident, but when it’s clear that someone may have deliberately caused the crash, it takes on an even worse dimension,” Bodo Klimpel told a news conference.

The head of the stricken school Ulrich Wessel summed up the feelings of the victims’ relatives and loved ones after it emerged co-pilot Andreas Lubitz had deliberately crashed the plane into a mountain.

“It leaves us angry, perplexed, stunned," he said. (Emergency teams at the scene of the crash. Photo: France's Interior Ministry)

'I am just trying to stay calm'

One of those shocked and angry relatives is Claude Driessens, from the Belgian town of Saint-Georges-sur-Meuse, near Liege.

Driessens had already booked a plane ticket to go and surprise his brother Christian on his 60th birthday in May.

But Christian was one of the 144 passengers on the doomed Flight 4U9525, who never stood a chance as their Düsseldorf bound plane was crashed in to the mountains with the co-pilot at the controls.

“I am in a rage. I am just trying to watch what I say and stay calm. He did it intentionally,” Claude Driessens told The Local on Friday.

Driessens and other relatives are now asking questions whether Lufthansa, the parent company of Germanwings knew about Lubitz’ reported history of depression. And also how one pilot was allowed to be alone in the cockpit.

“I find it unacceptable for a German company, which is rigorous, to allow two stupid things to happen. Firstly to allow a sick pilot to fly a plane and secondly for it not to be part of their regulations that when a member leaves the cockpit, someone else comes in, to accompany the person flying the plane, whether it be an air hostess or a steward, but there has to be someone. For me that’s blatant negligence.”


(Emergency teams at the scene of the crash. Photo: France's Interior Ministry)

As Driessens was speaking on Friday afternoon German airlines agreed new rules to ensure that two crew members are in a planes's cockpit at all times.

The “nightmare” for the families had deepened with the French prosecutors’ revelations about Lubitz on Thursday and things only became worse on Friday when it emerged that the co-pilot had been signed off sick for the day of the crash for an unspecified illness.

It is now believed he kept that illness hidden from his bosses.

“Today we learned that normally he wouldn’t have been at work. So how long was the company that employed about him in the dark,” Driessens said.

“Before I heard this information, I thought this man was sick, but I realize he’s a dangerous criminal,” said Driessens.

“He murdered 149 people. Can you imagine? And among the victims was my brother Christian.

“He was 59 years old and would have turned 60 on May 5th. I had already booked my ticket to pay him a surprise visit." (Co-pilot Andreas Lubitz, who is believed to have deliberately downed the plane)

'The loss of the plane is a ghastly horror'

Questions remain over the nature of Lubitz's illness with reports emerging on Friday afternoon that he had been treated for a physical rather than a mental condition.

Mental health organisations have been warning about jumping to conclusions about the co-pilot's mental health and the dangers of stigmatizing the millions who suffer from depression.

"The loss of the Germanwings Airbus is a ghastly horror. Until the facts are established, we should be careful not to rush judgements," said professor Sir Simon Wessely, President of the Royal College of Psychiatrists.

"Should it be the case that one pilot had a history of depression, we must bear in mind that so do several million people [in the UK].

Meanwhile Driessens and the other relatives of the victims will now have to wait as more and more details continue to emerge from a tragedy that has had an impact on numerous different countries as well as the global airline industry.

“I will wait until the end of the investigation. That is, until we know exactly what happened and that the investigators have put everything on the table that they have found out.

“Based on that the families of the victims could possibly create a pressure group, that’s how all this might end up. But for the moment it’s too early to judge anyone.”