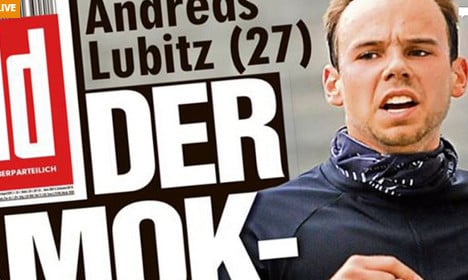 Details about the co-pilot Andreas Lubitz began emerging on Friday, including the fact he had been signed off sick for the day of the crash.

The co-pilot thought to have deliberately crashed his Germanwings jet into the French Alps, killing all 150 aboard, kept secret the fact that he was written off sick on the day, German prosecutors said Friday.

Searches of his homes had netted "medical documents that suggest an existing illness and appropriate medical treatment", including "torn-up and current sick leave notices, among them one covering the day of the crash", they said.

This "backs up the suspicion" that the co-pilot, who reportedly suffered from severe depression, "hid his illness from his employer and his colleagues", said prosecutors in the western city of Duesseldorf in a statement.

Prosecutors did not specify exactly what the sick note was for.

They added that the search of Lubitz's apartment in Düsseldorf did not reveal a suicide note or claim of responsibility.

There were no clues as to a political or religious background to Lubitz's actions, the prosecutors said.

The Düsseldorf authorities have informed their colleagues in France working on the case.

Berlin's Tagesspiegel also reported on Friday that an "informed source" said the co-pilot had been in treatment for depression at Düsseldorf's Uniklinik hospital.

Neither Germanwings parent company Lufthansa nor pilots' union Vereinigung Cockpit would comment immediately on the news when contacted by The Local.

The recent revelations about that pilot have left the brother of Christian Driessens, one of the victims of the plane crash "consumed by anger".

Earlier it had been revealed that Lubitz sought psychiatric help for "a bout of serious depression" in 2009 and was still getting assistance from doctors, Bild daily said, quoting documents from Germany's air transport regulator Luftfahrtbundesamt (LBA).

He was still receiving regular medical treatment, Bild reported, adding that Germanwings' parent company Lufthansa had transmitted this information to the LBA.

The paper also cited security sources as saying that Lubitz and his girlfriend were having a "serious crisis in their relationship" that left him heartbroken and distraught.

Lufthansa CEO Carsten Spohr said that Lubitz had suspended his pilot training, which began in 2008, "for a certain period", before restarting and qualifying for the Airbus A320 in 2013.

According to Bild, those setbacks were linked to "depression and anxiety attacks".

On Friday the Royal College of Psychiatrists in the UK issued a statement about the GermanWings plane crash, urging caution around the discussion of co-pilot Lubitz’ depression.

"The loss of the GermanWings Airbus is a ghastly horror. Until the facts are established, we should be careful not to rush judgements," said professor Sir Simon Wessely, President of the Royal College of Psychiatrists.

"Should it be the case that one pilot had a history of depression, we must bear in mind that so do several million people [in the UK].

"It is also true that depression is usually treatable. The biggest barrier to people getting help is stigma and fear of disclosure.

"We do not yet know what might be the lessons of the loss of the Airbus, but we caution against hasty decisions that might make it more, not less, difficult for people with depression to receive appropriate treatment. This will not help sufferers, families or the public."