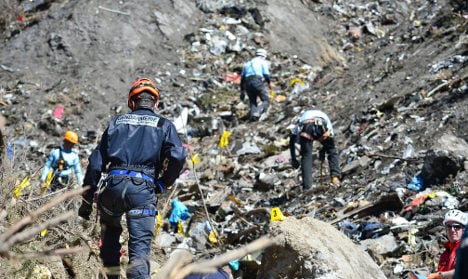 The search continues in the French Alps. Photo: French Interior Ministry/Twitter
Officials continue combing the wreckage for body parts and DNA samples for a fourth day in a row in the hope of identifying the 150 people who died on Tuesday when a Germanwings flight carrying 150 people crashed into a mountain in the French Alps.
All on board were killed, in what is understood to have been a deliberate move initiated by co-pilot Andreas Lubitz.
"We're first collecting biological elements, then debris," a police spokesman told AFP.
Late on Friday afternoon, French police reported that investigators had found 400 to 600 pieces of human remain, but no intact bodies.
Images released from France's Interior Ministry show the first real close look at crash site, a scene littered with debris from the aircraft. "There's not much plane debris left. There's mainly a lot of body parts to pick up. The operation could last another two weeks," police spokesman Xavier Vialenc told the AFP news agency.
There are 15 specialists on site, ten to take DNA samples and five detectives running the legal investigation.

Nearby, around 40 technicians are working on the DNA samples from the crash site, comparing them to samples taken from the families.
A local building has been commandeered and turned into a biological analysis unit, with several white tents running off generators.
Officials are also hoping to find the second black box, which records flight data. The information on it will help authorities piece together more details about the last moments of the flight.
A first black box was found earlier in the week, which was damaged but contained usable audio recordings from inside the cockpit.
It was thanks to these recordings that authorities learned that co-pilot Andreas Lubitz had locked his captain outside the cockpit. The captain was then heard desperately trying to break down the door, while the co-pilot ignored emergency warning calls from ground control.
The video below, from France's Interior Ministry, shares a closer look at the crash scene.

Also at the scene of the crash have been the bereaved families of the victims. After a memorial service on Thursday, the vast majority of them have now left.
Meanwhile, police have been combing over possessions taken from the two homes of the co-pilot.

German prosecutors announced on Friday that they had found a sick note that the co-pilot had hidden from his employers. He should not have been working on the day of the crash.
Read a full profile on Andreas Lubitz
It has been reported that the German had suffered at least one "bout of serious depression", forcing him to take a break from his flight training six years ago.
German newspaper Bild cited security sources as saying that Lubitz and his girlfriend were having a "serious crisis in their relationship" that left him heartbroken and distraught.
Meanwhile, the world is trying to come to terms with what very likely seems to be a suicide and mass murder. French Prime Minister Manuel Valls said that "everything is pointing towards an act that we can't describe: criminal, crazy, suicidal."
"It's up to the legal investigators — especially the Germans and of course Lufthansa — to shed light on the career and profile of this pilot," said Valls.