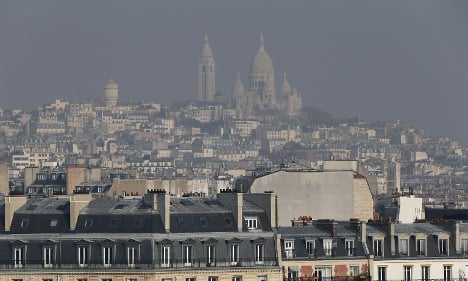 A smoggy day at the Sacre-Coeur Basilica in the Montmartre district of Paris. Photo: AFP
The summit will take place in Paris, which was incidentally ranked as the most polluted city in the world for a few hours last Wednesday.
Indeed, the Eiffel tower all but went missing in the smog last week, prompting drastic measures from Mayor Hidalgo including three days of free public transport and a driving restrictions for motorists.
However, Paris has been chosen as the meeting place for 30 European leaders who will gather to declare their commitment to "clean" policies in the battle against climate change, and to sign a declaration promising to use their collective purchasing power of around €10 billion a year to buy eco-friendly.
Mayors from 26 European cities, including Hidalgo and Bordeaux Mayor Alain Juppé, have released a statement detailing their plans to tackle climate change.
"If climate change is global, solutions are first and foremost local. Because large cities are at the crossroads of these two levels, they are at the forefront of the fight against climate change," they wrote.
They are targeting what they address as "the major causes of greenhouse gas emissions", which include polluting transport, old and/or poorly isolated buildings, and energy supply.
They are also fighting to improve recycling, to prioritize public transport, and to refurbish buildings.
"Because cities are amongst the major contributors to climate change, it is our duty to find viable paths for our future," they concluded.
Paris is also due to host the United Nations climate change conference in December.
The high pollution levels in Paris have made headlines in the past, with one study last year claiming that the city's air quality was so bad that it was the equivalent of being in a room with eight smokers.