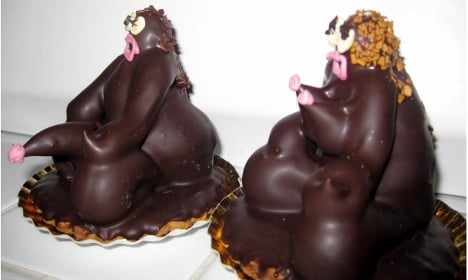 The baker must now remove the controversial cakes from his bakery. Photo: CRAN

On Thursday morning a court in Grasse, in the Alpes-Maritimes department of south-eastern France, ordered the town to force the baker to remove the offensive pastries from his boulangerie, deeming them an “attack on human dignity”, Le Parisien reported.

The sweet pastries in question, named “Gods” and “Goddesses” are in the form of obese people, covered in dark chocolate with over-sized sexual parts.

While the baker who sells the little men and women filled with shortbread and chocolate mousse saw the cakes as inoffensive, for one anti-racism group in France, they were anything but.

“It’s pure and simple racism,” Louis-George Tin from France’s Representative Council of Black Associations (CRAN) told The Local prior to the court ruling.

After being made aware of the cakes by a shocked customer, CRAN denounced the “obscene slave trade caricatures that tap into the tradition of colonial racism” and threatened to lodge a complaint for inciting racial hatred.

“We are in a country where the word equality is part of the constitution, which means it doesn’t allow for racism. Does he think these treats adhere to the values of the French Republic?” said Tin.

“We must fight this kind of racism. I cannot imagine what would be said (rightly) if an African baker decided to represent Jesus Christ or the Virgin Mary in a similar way,” Tin said.

However, when questioned by The Local when the cakes first hit headlines earlier this month, the baker Tannick Tavolaro was defiant.

He told The Local he found the complaint absurd and firmly denies he is racist.

“It’s made of chocolate mousse, which is why it’s black. The characters are little human beings, a man and woman but not a black man and a woman,” said Tavolaro.

“These people who attack me don’t know my story or my career or who I am. It’s just intellectual terrorism and I won’t yield to that kind of terrorism,” he said.

He also said he would continue to make his controversial cakes despite the threats.

“I am not racist. I do not belong to any political party. I just argue for freedom of speech,” he told The Local.

It's not the first time a bakery in France has provoked outrage over its creations.

In September last year a pâtisserie in Auxerre was forced to change the name of its biscuits named "bamboula" and "negro" after complaints from anti-racism groups.

And it's not just in France.

In 2012, Sweden's then culture minister Adelsohn Liljeroth came close to losing her job when she cut into the vagina area of a cake modelled on a black woman's body, which was part of an art project.