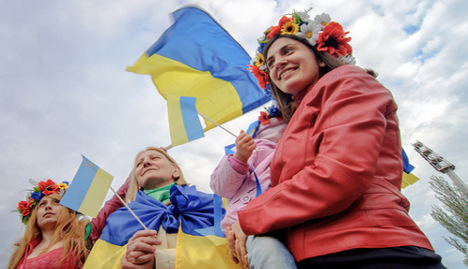 France saw a ten-fold increase in the number of Ukrainians applying for asylum in 2014, according to data released by Eurostat last week and analyzed by The Local.

France received the fourth highest number of applications from Ukrainian asylum seekers last year with 1,415 seeking shelter — ten times higher than the number of applicants in 2013, which stood at 135.

However Paris handed out one of the highest numbers of rejections to Ukrainian applicants on their first try, tying with the Czech Republic at 220 negative application decisions.  France accepted just 35 applicants in their first instances.

That number is even greater when compared to 2008, the beginning of the global economic crisis, when 925 Ukrainians applied for asylum.

“What we have seen from our members working with asylum seekers are those who are fleeing the conflict in the east of Ukraine,” Julia Zelvenska, a senior legal officer at the European Council on Refugees and Exiles, told The Local. “In the past, it has been for political persecution, like in 2013, or for sexual orientation.”

The UN refugee agency UNHCR said last month that an estimated one million Ukrainians were displaced internally, with many people moving west. Some 600,000 people had sought asylum, many of them in non-EU countries such as Russia, Belarus and Moldova.

But many Ukrainians also applied for asylum in the European Union in 2014, a year that started with a revolution in Kiev and the ousting of the pro-Russian president, Viktor Yanukovych.

Russia then annexed Crimea in March, in a move widely condemned around the world, before propping up separatists fighting bloody battles with Ukrainian forces in the east of the country.

Of those who applied for asylum in 2014, 650 Ukrainians received positive outcomes on their first application decision in the EU. Eurostat defines positive outcomes as grants of refugee or subsidiary protection status, or an authorisation to stay for humanitarian reasons.

Still, those who received good news were greatly outnumbered by those who were rejected in their first try – 2,335.

Zelvenska explained to The Local that it is generally very hard for Ukrainians to gain asylum in EU member states, or to even reach those countries in the first place.

“One of the main reasons people get rejected may be that many countries are not clear on how the situation developed and won’t issue decisions until it is clear how the Ukrainian situation is going to develop,” she said.

Zelvenska noted though that reasons for rejection are not made public so it is difficult to know for certain.

“We think it’s not necessary to apply all the criteria in a strict manner,” she said. “They must consider each case, country and the circumstances.”

Germany received the highest number of Ukrainian asylum requests at 2,705, Eurostat reported – 18 times greater than the number in 2013, 150.

Of the Ukrainians who applied, Germany accepted 20 in the first instance, but rejected another 45.

Italy received the third highest number of Ukrainian asylum seekers last year, but also saw one of the greatest increases in applications. In 2013, just 35 Ukrainians applied for asylum in Italy, but that number jumped to 2,080 in 2014 — a startling 60 times the number from 2013.

Italy accepted the highest number of Ukrainian applicants compared to all other EU countries, with 165 applicants receiving positive outcomes, followed by the Czech Republic (150) and Finland (145).

Sweden was among the top five countries for Ukrainian asylum applicants with 1,320 people, nearly eight times the number of asylum seekers in 2013 at 170 applicants.

Sweden rejected eight times as many Ukrainian applicants in their first instances as they accepted, with just 20 receiving positive outcomes compared to 160 rejections.

Spain saw one of the most dramatic increases in Ukrainian asylum seekers with just 15 applying in 2013 compared to 895 people in 2014, or 60 times that of 2013. Ukrainians also made up the second largest group of asylum seekers in Spain, following 1,510 Syrian applicants.

Spain rejected 80 Ukrainians in their first asylum application attempts, and had not accepted any applicants in 2014, according to the Eurostat data.

Norway rejected 75 Ukrainian asylum applicants in their first attempts, but had not accepted any applicants in 2014, according to Eurostat data.

Three times as many Ukrainians applied for asylum in Denmark in 2014 than in 2013, with 135 applicants last year compared to just 40 the year before.

Denmark rejected ten Ukrainian asylum applicants in their first attempts, but had not accepted any applicants in 2014, according to Eurostat data.

No data was available for how many Ukrainian applicants Austria had accepted or denied.