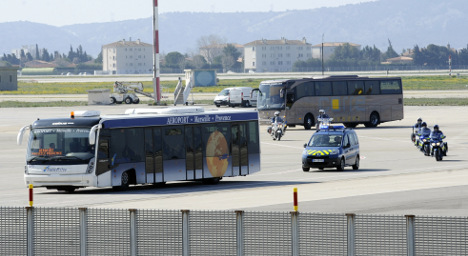 Buses carrying family members of the victims of the Germanwings plane crash are escorted by police in Marignane airport, Marseille. Photo: AFP

"Two planes from Duesseldorf and Barcelona, with families and friends of victims on board, have just landed," the official, Pierre Henry Brandet, said.

They were due to meet prosecutor Brice Robin, who is leading the investigation, before taking a bus to the area of the crash in the Alps.

A plane chartered by Lufthansa left Barcelona about 10:00 am (0900 GMT) for Marseille carrying some 60 relatives on board, a source in the Spanish crisis committee for the disaster told AFP.

All 150 people on board the Airbus 320 operated by Germanwings, Lufthansa's low-cost subsidiary, died when it crashed on Tuesday en route from Barcelona to Duesseldorf in Germany.

At least 72 Germans and 51 Spaniards were among those on board, according to various tolls given by Spanish authorities and the airline.

Escorted by police, the families made no comment to reporters as they boarded buses at a nearby hotel for Barcelona's El Prat airport early Thursday morning.

A handful of other relatives left Barcelona for France on Wednesday by coach because they did not want to fly, an official said.

The spot where the plane crashed is hard to access and closed off while rescuers search the debris, but reception centres have been set up nearby.

French police Thursday pushed news media back away from an area in the Alpine village of Le Vernet ahead of the arrival of families of the 150 people who died in the Germanwings crash.

"The families don't want any images of them as they pay their respects. We ask you to respect their privacy," one police officer who declined to be identified said as he ordered journalists away.