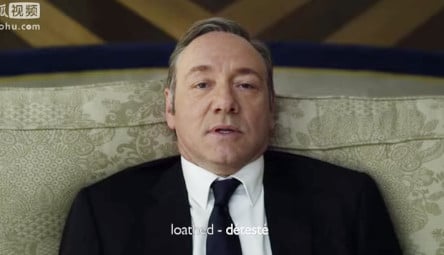 Smartsubs only translates complicated words and expressions in the subtitles. Screengrab: Smartsubs/YouTube

Like many French people who watch English TV series or films, Kévin Perez was torn between whether to put subtitles in English, in French, or simply to remove them altogether.

“I have a good level of English and understand 90 percent of the dialogue but that last ten percent is really important,” Perez tells The Local.

However when he put the subtitles on he found that he listened less to what the characters were saying in English and didn’t end up learning much either.

It was this quandary that led the IT consultant to create the subtitling service Smartsub with statistician engineer Félix Revert.

But unlike traditional subtitles which translate all dialogue word for word, theirs are more selective.

“We thought that by just putting the complicated words in subtitles we would be able to follow the programme as well as learn some new words,” he says.

All users have to do is to move a video file into a box in the “Video” section of the Smartsub website. Viewers then have the option of reviewing the words from the clip they have seen using in the website’s “training” section.

The service is also designed to adapt to the user’s level based on the programmes they have watched. Watch an example of how it works below.

Perez says he hopes that the new form of subtitling will help him and other French people – who were recently ranked among the worst at English in the EU – pick up the language a little faster.

“The French are not really known for the quality of their English because we don’t watch series in their original language.

“We learn English out of context in grammar books and it’s much harder. But it would be easier to learn it through the series we watch.”

The business is still in its early days but the pair are ambitious.

“The idea is to create partnerships with legal streaming platforms as quickly as possible,” co-founder Félix Revert told the French edition of the Huffington Post.

Eventually, the pair hope to turn their creation into a profitable business, by selling content for books, series, e-books and newspaper articles.