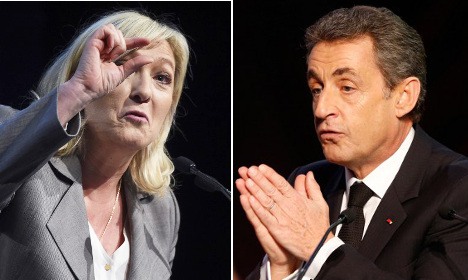 Marine Le Pen and Nicolas Sarkozy. Photo: AFP
Former president Sarkozy has rejected the tête-à-tête with the National Front's Marine Le Pen after turning down an invitation from French channel BFM TV, the channel reported.
The interview was proposed for this week, directly between Sunday's first round of local elections and the upcoming second round on March 29th.
Sarkozy's UMP party came out on top in the first round thanks to an alliance with other centre-right parties, ahead of the National Front.
Marine Le Pen had said that she would "with great pleasure" accept the opportunity to discuss politics with Sarkozy – but it wasn't to be.

(Jean-Jacques Bourdin, the TV host, tweets that Sarkozy refused the proposal)
The channel noted that Sarkozy had turned down debates in the past with the first secretary of the Socialists. According to reports Sarkozy, sees himself more as the former president rather than the leader of France's opposition party and so engaged in a debate with Le Pen was beneath him.
However it's perhaps more likely that Sarkozy is feeling the heat from Le Pen and her National Front party and does not wantto risk going up against the wily far-right leader live on TV.
Earlier this year Sarkozy made it clear that the threat of the far-right could no longer be ignored.
"A victory for the National Front (FN) at the national level is no longer hypothetical," he told members of his conservative UMP party.
But despite his concerns, which are shared by those on the left, Sarkozy and the UMP are sticking to their guns and will not call on supporters to vote forthe Socialist Party candidate in order to keep out the FN.
Their policy is referred to as "ni-ni", meaning neither "ni front républicain, ni Front national", with "front Republicain" referring to the idea that the centre-left and centre-right should unite against Marine Le Pen's party.
That stance has infuriated the Socialist government, not least the Prime Minister Manuel Valls, who described the party's position as a "moral failing and a political mistake".
"When we have to chose between a Republican candidate and the National Front, we shouldn't hesitate. The left doesn't hesitate," said Valls.
Sarkozy hit back and told the Prime Minister "to keep the lessons on morality for himself".
Sarkozy described the vote as a "massive shift" back to a "reunited" right-wing.
Le Pen called the results a "very big success", with her party leading the first-round vote in 43 of 101 "departments", which have power over local issues such as schools and welfare.
The Socialists trailed in third with an estimated 22 percent, the latest haemorrhage of support for the party since Hollande, who has failed to address double-digit unemployment in the eurozone's second-largest economy, took charge in 2012.