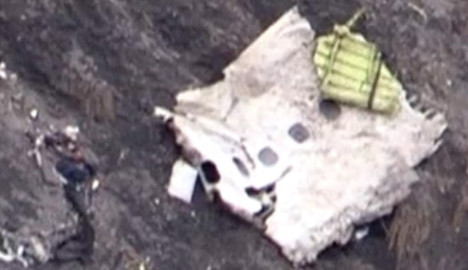 Part of the wreckage of the Germanwings Airbus A320 plane that crashed in the French Alps. Photo: AFP

A plane operated by Germanwings, the budget carrier of Germany's Lufthansa crashed in a remote area of the French Alps on Tuesday, killing all 150 on board in France's worst aviation disaster in decades.

With the cause of the accident a complete mystery, authorities recovered a black box from the Airbus A320 at the crash site, where rescue efforts were being hampered by the mountainous terrain.

Lufthansa is working on the assumption that Tuesday's crash of an Airbus operated by its budget carrier Germanwings was an accident, a senior airline official said.

"For the time being, we say it's an accident, anything else would be speculation," Lufthansa vice president for sales and services in Europe, Heike Birlenbach, told reporters at Barcelona airport from where the plane took off.

The airliner, carrying 144 passengers — including two babies — and six crew, was travelling to the western German city of Duesseldorf when it came down in the French Alps, killing everyone on board.

PLANE CRASH RECAP: What we know so far (The scene of the crash site in the French Alps)

Birlenbach said the Airbus A320 has passed its last routine check on Monday and could not explain why it took off 20 minutes late.

"Only if those checks are ok are aircrafts allowed to fly," she said.

Local French MP Christophe Castaner, who flew over the crash site, said on Twitter: "Horrendous images in this mountain scenery."

"Nothing is left but debris and bodies. Flying over the crash site with the interior minister — a horror — the plane is totally destroyed."

Video images from a government helicopter flying near the area showed a desolate snow-flecked moonscape, with steep ravines covered in scree.

Budget airline Germanwings said the Airbus plunged for eight minutes but French aviation officials said the plane had made no distress call before crashing near the ski resort of Barcelonnette. A black box was found and will be delivered to investigators," Interior Minister Bernard Cazeneuve said.

Weather did not appear to be a factor in the crash, with conditions "calm" at the time.

"There was no cloud at the plane's cruising altitude", winds were "light to moderate" and there was no turbulence that could have contributed to the crash, French weather officials said.

Prime Minister Manuel Valls said there were no survivors, adding that the authorities "can't rule out any theory" on the cause of the disaster.

The plane, carrying 144 mainly Spanish and German passengers — including two babies — and six crew, was travelling from Barcelona to the western German city of Duesseldorf when it came down.

German authorities said 16 German teenagers on a school trip were on board the doomed plane, as tearful relatives rushed to the airports in the two cities anxiously seeking information about their loved ones.

French President Francois Hollande said he would meet his German and Spanish counterparts at the crash site on Wednesday. 'It is a tragedy'

It was the first fatal accident in the history of Germanwings, and the deadliest on the French mainland since 1974 when a Turkish Airlines crashed, killing 346 people.

"It is a tragedy, a new airline tragedy. We will determine what caused the crash," Hollande said.

The dead included Germans, Spaniards and "probably" Turks, Hollande said, while Belgium said at least one of its nationals was on board.

Germanwings said 67 Germans were believed to have been on board while Spain said 45 people with Spanish sounding names were on the flight. IN PICTURES: See a timeline of the crash

A crisis cell has been set up in the area between Barcelonnette and Digne-les-Bains along with an emergency flight control centre to coordinate the chopper flights to the crash site.

Authorities commandeered a large meadow with dozens of helicopters taking off to head to the crash site.

Valls said one helicopter had been able to touch down at the site of the accident but locals described the difficult terrain that awaited rescue teams.

"Ground access is horrible, I know the Estrop massif, it's a very high mountainous area, very steep and it's terrible to get there except from the air during winter," local resident Francoise Pie said.

A witness who was skiing near the crash site told French television he "heard an enormous noise" around the time of the disaster.

'Crew did not send a Mayday'

French civil aviation authorities said they lost contact with the plane and declared it was in distress at 10:30am (0930 GMT).

However, the aircraft's crew did not send a distress signal, civil aviation authorities told AFP.

"The crew did not send a Mayday. It was air traffic control that decided to declare the plane was in distress because there was no contact with the crew of the plane," the source said.