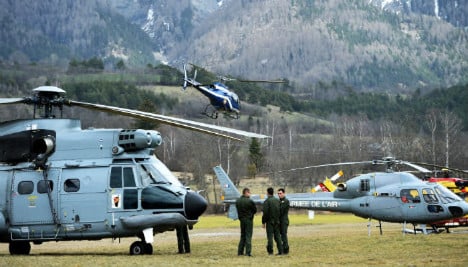 Helicopters from the French Air Force and civil security services on the scene. Photo: AFP
LIVE BLOG: Read the latest on the plane crash
Detailing the few facts known so far about the crash, Germanwings executive Thomas Winkelmann told a news conference that the 24-year-old jet had taken off from Barcelona in Spain at 10:01 am (0901 GMT) headed for Duesseldorf in Germany, where it had been scheduled to land at 11:35 am.
There were 144 passengers on board, including two babies, as well as six crew — two in the cockpit and four cabin staff, Winkelmann said.
The plane reached its regular cruising altitude of 38,000 feet (11,500 meters) at 10:45 am. But after just one minute, it started plunging.
PLANE CRASH RECAP: What we know so far IN PICTURES: See a timeline of the crash
The descent lasted eight minutes and French air traffic controllers lost contact with the plane at 10:53 am, when the aircraft had reached an altitude of around 6,000 feet, Winkelmann said.
"The aircraft then crashed," he said.
The plane was bought by Lufthansa, Germanwings' current parent company, in 1991 and passed into the service of Germanwings in January 2014.
It underwent a routine check on Monday in Duesseldorf, while the last general thorough check was carried out in the summer of 2013.
The pilot had "more than 10 years of experience" at Lufthansa and Germanwings and some 6,000 flying hours on an Airbus jet under his belt,
Winkelmann said.